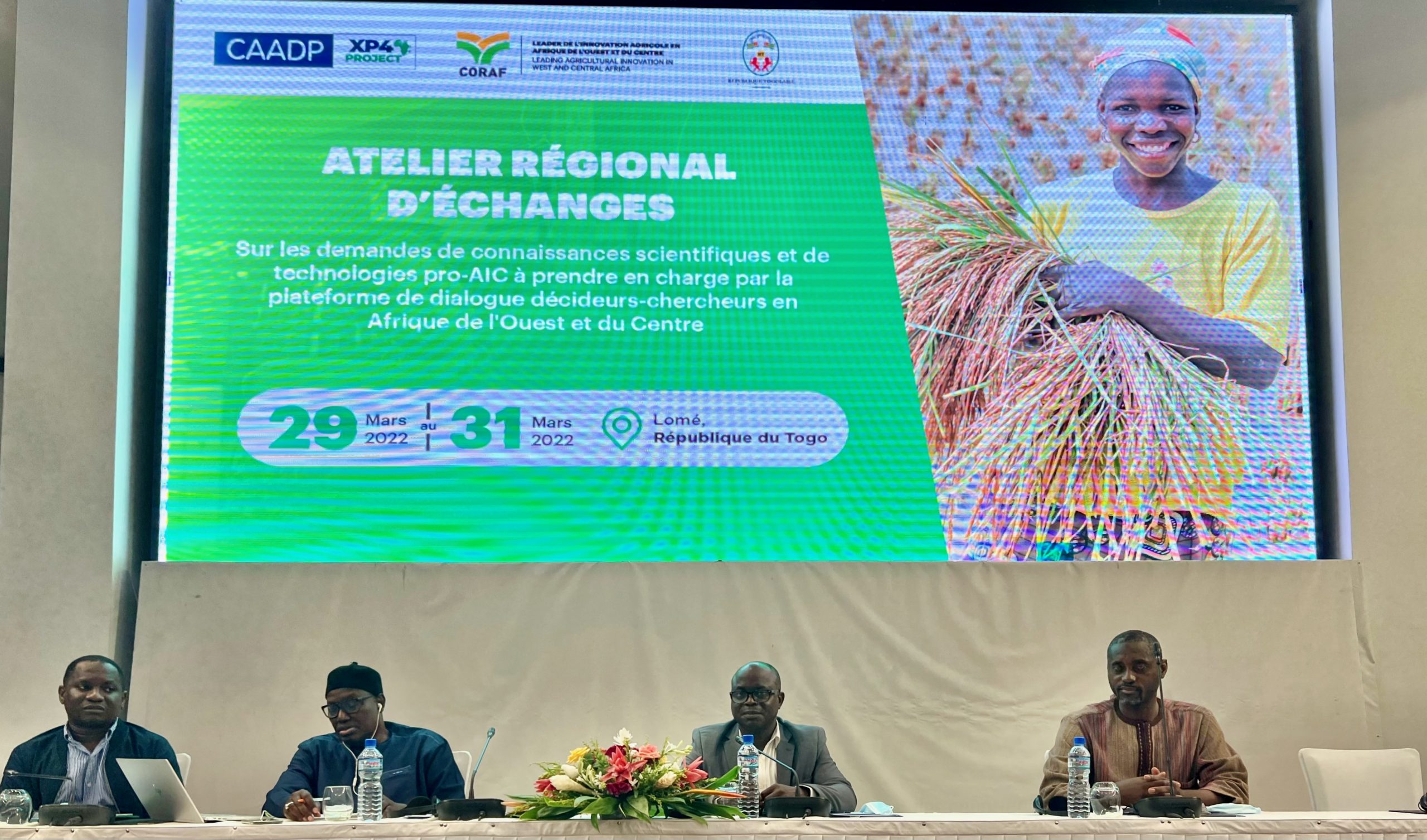 [Lomé, Togo, 29 March 2022] – At the initiative of CORAF, some 60 key stakeholders in the West and Central African agricultural sector are meeting in Lomé from March 29 to 31, 2022, to reflect on the modalities for the deployment of a dialogue platform between policymakers and researchers, for the effective promotion of climate-smart agro-sylvo-pastoral and fisheries production systems throughout the sub-region.

The policymakers-researchers dialogue platform aims at playing a key role in mitigating the effects of climate change on agriculture, by promoting climate-smart knowledge, technologies and innovations.

The food systems of West and Central Africa are undergoing the drastic effects of climate change, which threatens the food and nutritional security of more than 550 million people, with a risk of worsening rural poverty,”

Faced with this threat, stakeholders agree that it is now more than ever time to act, by putting in place a framework that allows to leverage scientific and technical knowledge and available technologies and innovations, to curb the effects of climate change.

“It is more than urgent to act now to build climate resilient food and agricultural systems in West and Central Africa. And climate-smart agriculture is the most effective way to develop the agricultural sector in this context,” underlines Dr. Abdou Tenkouano.

In fact, this workshop is a continuation of previous consultations of Dakar and Kinshasa, which have led to the reviving of the West Africa Climate-Smart Agriculture (CSA) Alliance, and to the establishment of a similar Alliance for Central Africa.

Furthermore, it will provide participants with the opportunity to take ownership of the outcomes of African States’ participation in the 26th iteration of the Conference of Parties (COP 26), including States’ Nationally Determined Contributions (NDCs).

Objective of the workshop

The overall objective of the workshop is to consolidate the partnership relations between itself, in its role as coordinator of agricultural research and development in West and Central Africa and representing the “supply pole”, and the “demand pole” of pro-CSA scientific knowledge, technologies and innovations, in the view of the deployment of the policymakers-researchers dialogue platform in West and Central Africa.

The “demand pole” here is made up of the CSA Alliances and the public administrations in charge of the NDCs.

“The CSA Alliances and NDC processes will help identify demand for climate change mitigation and adaptation technologies that CORAF intends to consolidate for the deployment of the platform for dialogue between policymakers and researchers as well as state and non-state actors, for the effective promotion of agro-sylvo-pastoral and fisheries production systems in West and Central Africa,” says the Executive Director of CORAF.

Once deployed, it is expected that the policymakers-researchers dialogue platform will foster and facilitate the matching of the demand for technologies formulated by the users, with the supply of technologies offered by the researchers, with the aim of a more effective response to the climate change and improved resilience of agricultural systems.”