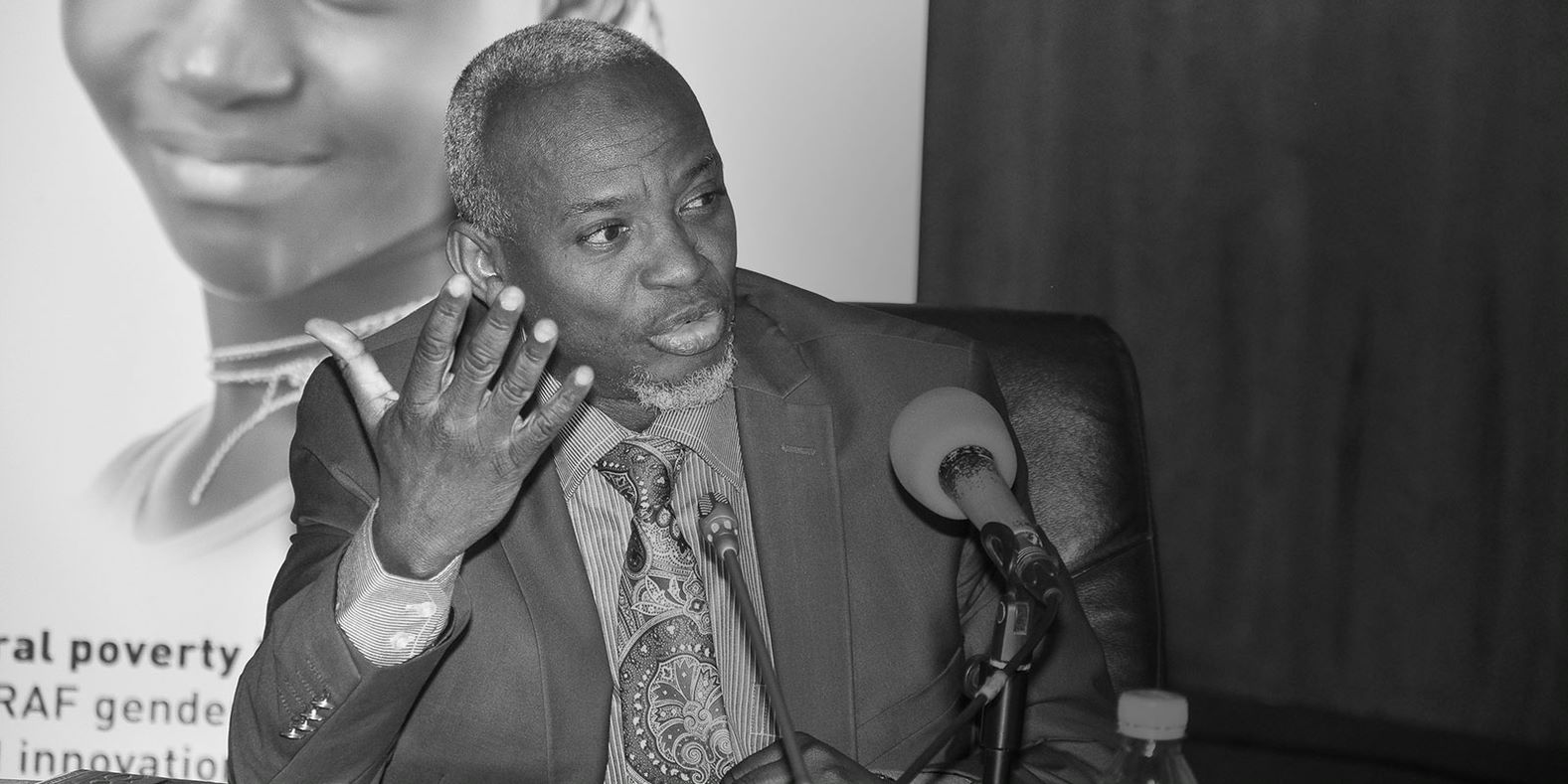 Abdoulaye Toure might have looked frail in recent years, but the unfinished mission of getting technologies to the poor farmers of West Africa meant he hardly missed a professional appointment. And this is why when his death was announced on Sunday, June 16, it threw everyone off.

For many, Toure’s departure represents a colossal loss of immense proportion not only because of the work left to be done to feed Africa but also because of the exceptional human qualities he exemplified. No doubt, the adjectives used to describe the man have ranged from: a visionary, faithful, wise, humble, sympathetic, courteous, highly respectful, loving, and caring.

Dr. Toure has been in development for close to three decades. But it is the last decade that has been one of the most defining of his career. Together with many other development actors, Toure helped engineer the West Africa Agriculture Productivity Program (WAAPP). In its tenth year now, this program is one of the most substantial world Bank investments in West Africa, covering 13 countries.

With nine million direct beneficiaries, 56 million indirect beneficiaries, more than 200 technologies released and adopted by almost 4,5 million producers on about 4.8 million hectares, over 1000 students trained, and increases in crop yield, many have been in celebratory mode.

He recognized the WAAPP’s contribution to lifting millions out of poverty through the delivery of innovations to farmers across West Africa yet argued consistently that the job was incomplete.

“We did not pay a lot of focus on extension services under the WAAPP, and this partly explains the modest adoption levels of technologies and innovations,” Toure admitted during what has become a peer-to-peer learning event of all WAAPP participating countries in Niamey, Niger in November 2018. In the WAAPP jargon, these events are known as the wrap-up meetings.

Together with a select group of highly-talented and experienced experts from across leading multilateral development institutions including the World Bank and the International Fund for Agriculture Development as well as regional and national institutions, Dr. Toure spent the last two years strategizing another iteration of the WAAPP.

Known as the West Africa Agriculture Transformation Program (WAATP), this new program which has been under development through Toure’s leadership will focus on emerging challenges facing farmers, small producers, processors, and the agriculture industry in West Africa.

As recent as June 2019, he was still driving the process, trying to skew the new program to focus on emerging and pressing climate change, nutrition, trade, regional food reserves, gender and youths’ issues.

So much was he committed to the flight to lift others out of difficulties that he sometimes forgot to take care of himself. He resisted numerous calls to take a break and focus on his health.

On June 12, 2019, he was flown to Paris for intensive medical care, whence the Almighty God, to whom Toure showed steadfast devotion had different plans for him. And this will become his final contribution to lifting the poor out of poverty.

“This is a mighty loss of someone who loved Africa. Someone who nursed abundant hopes to see a transformed, prosperous and, strong Africa,” wrote Dr. Angela Moreno, Chairperson of the Board of Governors of CORAF upon learning of his death.

Toure is trained as an economist. But in his recent development work, agricultural research became his passion. He saw in it a vast potential to address some of the challenges related to food systems in West Africa.

An Advocate of CORAF

With the WAAPP model of regional integration, he understood more than many that coordination was central. Reasons why he became a tireless champion of CORAF. The regional economic communities in West and Central Africa have mandated CORAF to coordinate agricultural research.

He hardly missed an institutional support mission to CORAF. He was quick to praise CORAF for its coordination role in the WAAPP but did not also hold back when it meant pushing CORAF to do more.

“CORAF must do more to facilitate the exchange of technologies and innovations at the country level. CORAF is also accountable to the expected results particular with respect to the adoption of technologies. What this means is that as part of its regional coordination mandate, CORAF must play an active role in facilitating technology exchanges and adoption,” Toure said during a November 2018 institutional support mission to CORAF.

“You cannot delink the last decade in which CORAF registered some incredible results in terms of socio-economic impacts on West Africans through the implementation of the WAAPP and the multi-donor trust fund from Toure. He has been at the center of our story. For that and all the people CORAF represents, we shall remain forever appreciative,” says Dr. Abdou Tenkouano, Executive Director of CORAF.

It is tragic this news of the death of Dr. Abdoulaye Toure. He was one of the most respected World Bank men here in Cape Verde. I remember how much he fought for Cape Verde’s entry into WAAPP and I remember how he was a great advisor to CORAF. He was a man of vision, a faithful and wise man.

CORAF will send a letter of condolence to his Family and World Bank on behalf of all members and be represented at the funeral of this who was a great man of AFRICA.

May God raise among us in Africa another person with a heart and vision equal to that of Dr. Toure. May he ascend in peace in the arms of the Almighty God.

The World Bank has lost its best staff. Africa’s agriculture has lost one of its most committed sons. For CORAF which he invested immensely to see it develop, it is a massive loss. CORAF is one of his legacies. He expressed deep pride in the institutional growth of CORAF.  He loved CORAF, and I can attest to that.

Indeed, a revered and cherished friend, brother and colleague has passed away.

Indeed, a heavy loss for the all working in the area of agricultural research for development the region of West and Central Africa in particular and Africa in general.

Let us always remember him as an incomparable humanist, an ardent worker, a humble being, a very sympathetic person, a courteous man, highly respectful, loving, and caring.

We are indeed devastated by such sad news but let us celebrate the life of Abdoulaye Toure by paying tribute to him as one of the greatest actors and supporter of all time to the cause of agricultural research for development in Africa.

Let us highlight his solid devotion, relentless commitment, and utmost dedication. In particular, let us in our various ways try as much as possible to ensure that the transition from WAAPP to WAPPT becomes a reality and a shining lamp to his name.

Let us present to all members of his close and enlarged family, relatives, friends and colleagues, our most sincere condolences. In this moment of deep grief may their sorrows be soothed.

Allah has given and Allah has taken away.  Let us pray that his soul rests in perfect and perpetual peace.

It is with emotion that I learn the death of Mr. Touré. He has invested a lot in the development of research and the transfer of technologies for the African continent. He was always jovial during our discussions; his constant concern was how to make the results of the research impact the development of agriculture. My sincere condolences to his family. Rest in peace.

It is indeed tragic to receive the sad news of the passing on of Abdoulaye Toure. Mr. Toure was a great collaborator and partner with us at the African Development Bank during the Bank’s development of the “Multinational – Technologies for African Agricultural Transformation (TAAT).” I clearly recall how he saw a great entry point for the World Bank in the TAAT program through the TAAT Clearinghouse and how he saw the Clearinghouse collaborating with the different Centers of Excellence established through the support of the World Bank. He also was kind enough to share with us the relevant concept notes they had at the World Bank as we discussed issues related to synergy of operations and the need to avoid duplication but promote complementarity. This is really a huge loss to his family, friends, colleagues, and partners as well as the region. We will miss his strong support to Agricultural Development in Africa, especially West Africa. May the Almighty Father grant him eternal rest.