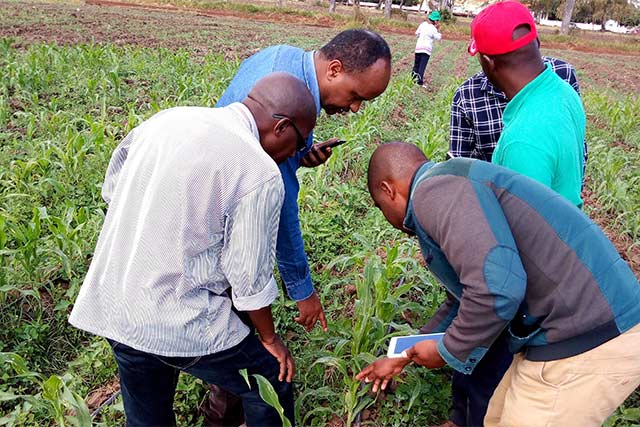 The United Nations’ Food and Agriculture Organization and Pennsylvania State University joined forces to develop and launch an innovative, talking app – Nuru – to help African farmers recognize Fall Armyworm, a new and fast-spreading crop pest in sub-Saharan Africa, so that they can take immediate steps to destroy it and curb its spread.

Fall Armyworm first appeared in Africa in 2016, in West Africa, and then rapidly spread across all countries in sub-Saharan Africa in 2017, infecting millions of hectares of maize, and threatening the food security of more than 300 million people. Many African farmers might have heard about Fall Armyworm but are seeing it for the first time, and are often unable to recognize it or unsure of what they are facing. With the new application, they can hold the phone next to an infested plant, and Nuru can immediately confirm if Fall Armyworm has caused the damage.

Nuru is an app that uses cutting-edge technologies involving machine learning and artificial intelligence. It runs inside a standard Android phone and can work also offline. “The new tool will help farmers recognize their new enemy and take immediate measures to stop it. It complements FAO’s recently launched Fall Armyworm Monitoring and Early Warning System (FAMEWS) mobile app, which builds knowledge on how and where the pest spreads, and what makes it less damaging,” said Keith Cressman, FAO Senior Agricultural Officer who leads FAO’s digital response to Fall Armyworm and other pests.

“An important feature on the new tool is that it can work offline so farmers can use it whenever they want it. Nuru is like an extension officer who is always there for the farmers, in their fields,” said David Hughes, a professor of Entomology and Biology at Pennsylvania State University, which led the development of the app with FAO.

FAO and Pennsylvania State University are working on new features to make Nuru an even more powerful ally against Fall Armyworm in the next months. Soon, in addition to English, Nuru will be able to speak to farmers in their own language, walking them through the process of checking their crops for Fall Armyworm, reporting back on infestation levels, and giving them advice on how to fight the pest. Nuru will speak Swahili, French and Twi and will be learning new languages all the time.

Nuru is currently inside the PlantVillage app, which is a free app built at Pennsylvania State University with FAO, CGIAR and other public institutions, and will soon be linked into FAO’s FAMEWS app. Once the famers get online, all the data will flow from FAMEWS, where the data is validated by national Fall Armyworm focal points, into a global web-based platform. The platform analyses data from across Africa to give a real-time situation overview with maps of Fall Armyworm infestations and the measures that were most effective in reducing its impact.

“FAMEWS and Nuru are integral parts of FAO’s sustainable management of Fall Armyworm programme. They feed information to farmers and extension workers so that they can take action against the pest, whilst guiding decision-makers’ response and building everyone’s understanding of the pest and its threat to food insecurity,” said Allan Hruska, FAO’s Principal Technical Coordinator on the Fall Armyworm response. “Digital tools are increasingly becoming integral components of the FAO’s systems of identification, monitoring, training, and decision-making of globally-important crop pests and diseases,” added Hruska.

FAO and its partners have been at the forefront in tackling FAW, and continue to support prevention, early warning and effective response. FAO took immediate steps as soon as FAW was detected in Africa, including: bringing together experts to share knowledge and experiences on sustainable FAW management; developing tools to build better understanding and means to tackle FAW; supporting countries to mitigate pest damage, develop action plans, and train extension workers and farmers.

In October 2017, FAO launched a five-year, $87 million programme to help farmers and countries effectively respond to and sustainably manage Fall Armyworm in Africa. To date, FAO requires $75 million to carry out the programme at large scale. FAO’s Fall Armyworm response is supported by Belgium, Ireland, Japan and the United States of America.

The original story was published on the website of the FAO