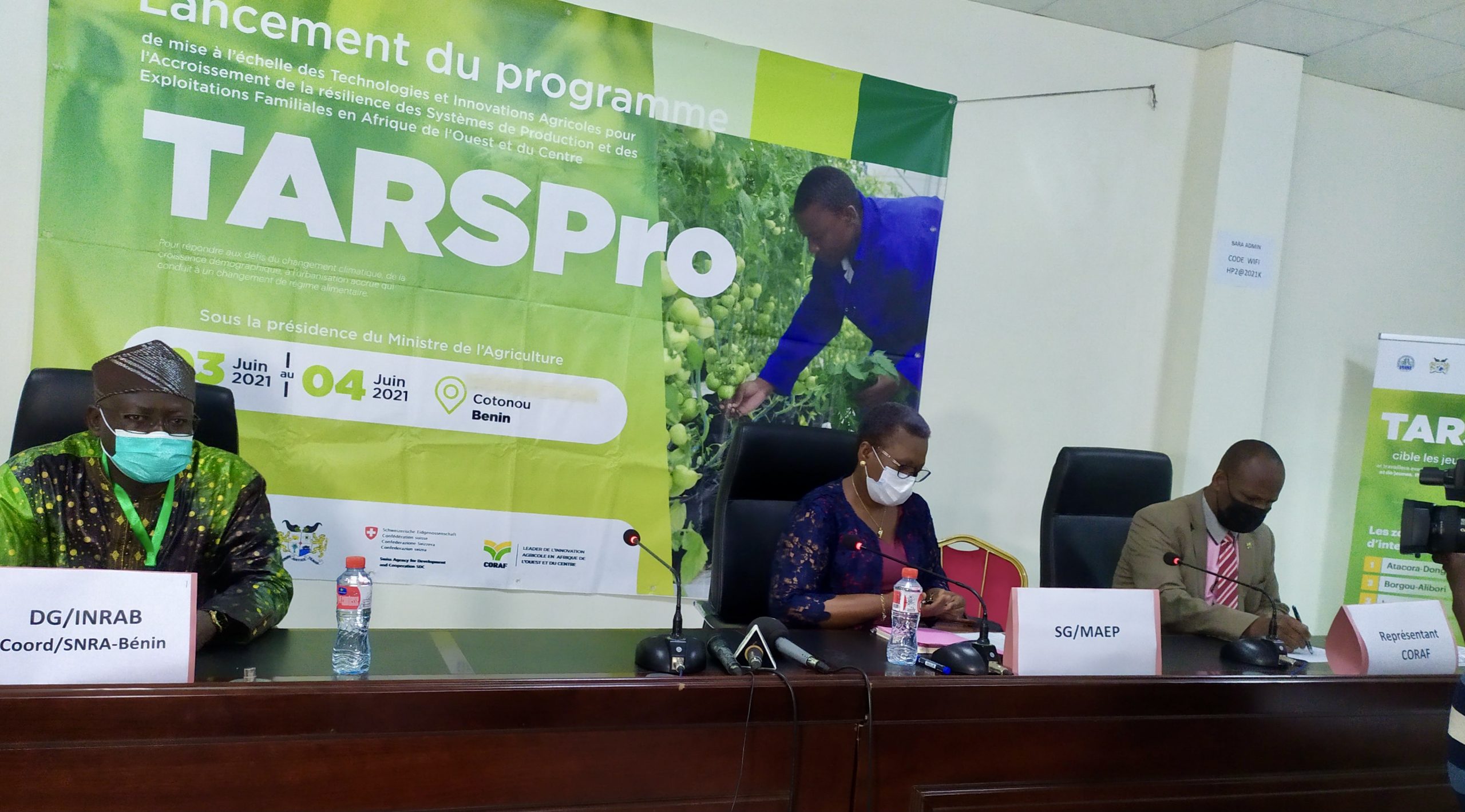 The Secretary-General at Benin’s Ministry of Agriculture, Livestock, and Fisheries has lauded a new technology-scaling up program designed to help farmers in Benin and four other countries in West and Central Africa cope better with the stress brought about by climate change.

At the launching of the project in Cotonou recently, Ms. Françoise Assogba Comlan told an audience primarily of project stakeholders that the new project is aligned with Benin’s priorities.

The Agricultural Technologies and Innovations Scaling Up Project for Increasing the Resilience of Production Systems and Family Farms in West and Central Africa (TARSPro) is the latest project to be implemented by CORAF in partnership with partners of national agriculture research systems. The Swiss Government funds TARSPro through its agency for international development – the Swiss Development Cooperation.

The project has already been launched in Burkina Faso and would soon be launched in the other targeted countries, including Niger, Chad.

Alignment with Priorities of Benin’s Government

Under its current president, Benin is implementing an Action program, which has as one of its core components the promotion and development of agriculture.

Like most countries, funding for the national agenda combines national resources and other resources drawn from multilateral and bilateral donors. And in some cases, there are grants from other development partners. Sometimes, these projects may not be directly aligned to government priorities.

Speaking at the launch ceremony, the senior government official praised the expected contribution of TARSPro to the economy and farmers of Benin.

“TARSPro perfectly fits into the Agricultural Development Strategic Plan and more particularly into the strategic axes of the agriculture component of the Action Program of the President of the Republic,” said the SG of the Ministry of Agriculture.

This program seeks the transformation of agriculture to promote food self-sufficiency and cash production and cultivation techniques and practices able to strengthen the resilience of production systems.

How Research Can Help Address the Challenges of Agriculture

Agriculture in West and Central Africa is currently facing immense stress. Besides challenges linked to soil degradation, the food system is currently beset by climate change and biorisks. The COVID-19 pandemic has further compounded the situation. To many, these challenges cannot be tackled without adequate research and development.

“Without the application of science, innovation, and technology, our region would not be able to address these challenges sustainably,” said Dr. Niéyidouba Lamien, a program manager and representative of CORAF at the launching ceremony.

TARSPro is specifically targeting underprivileged populations in the selected countries.

“Women and young people being the most vulnerable groups of these small family farms. TARSPro has been designed with a specific focus on young people,” added Dr. Lamien.

Overall, close to ten million people are targeted throughout the duration of the project.

The main implementing partner of the TASRPro project in Benin would be the National Agricultural Research Institute of Benin (INRAB).

Speaking at the launching ceremony, the Director General of INRAB, committed that his institution would do everything possible for the success of the program.

“On behalf of Benin’s NARS, I make the commitment, not only to contribute to the success of TARSPro, but also to generate more innovations for the purposes of viability of farms and development of the rural world,” said Dr. Adolphe ADJANOHOUN.

With the launching of TARSPro, actors can now pivot to full implementation.