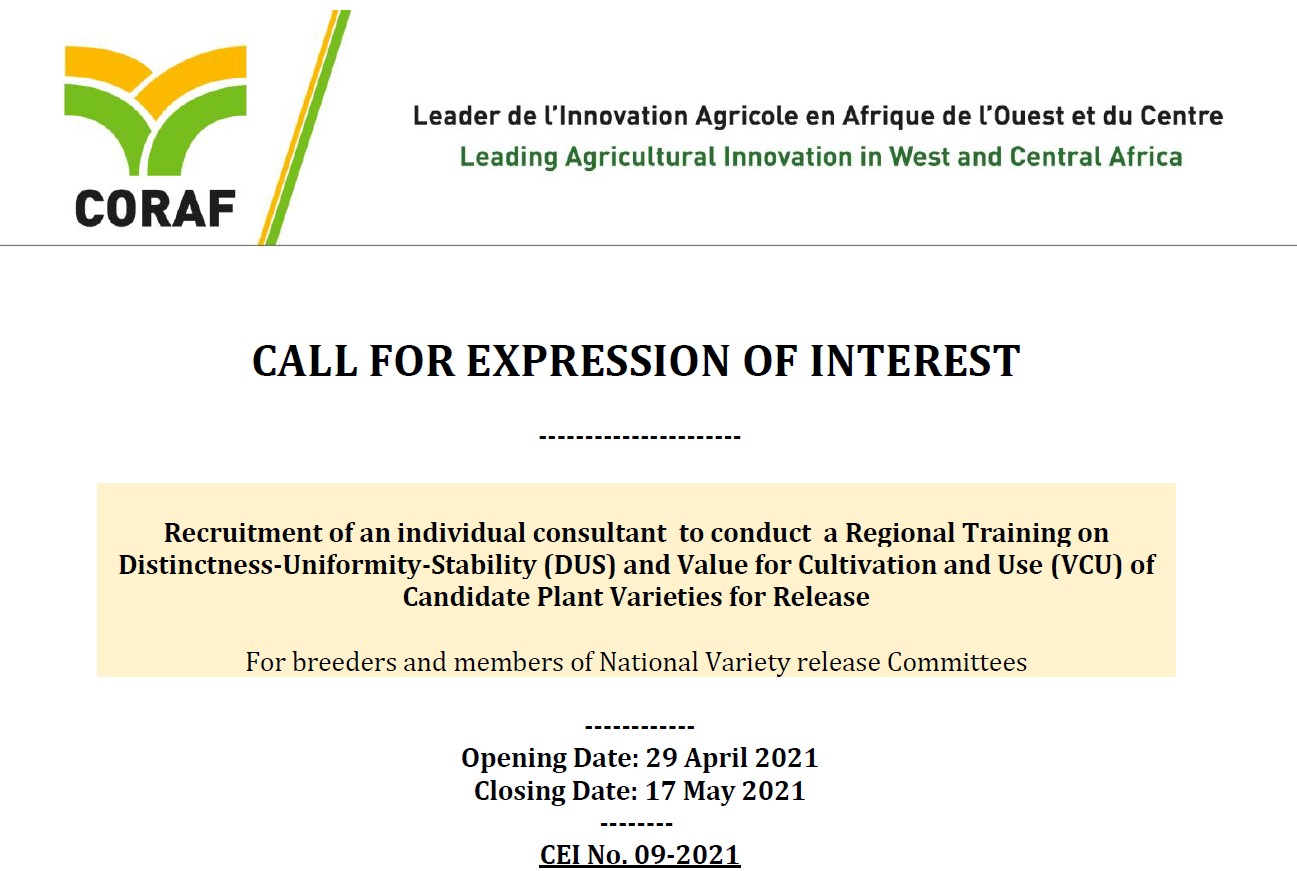 For breeders and members of National Variety release Committees

CORAF has received funding from USAID/West Africa to implement the “Partnership for Agricultural Research, Education and Development(PAIRED)” program. A portion of the program resources is earmarked to support the Regional Seed and Seedling Committee in West Africa and in the Sahel for the implementation of harmonized regional seed regulations on seeds and seedlings quality control, certification and marketing in West Africa (C/REG.4/05/2008 of ECOWAS and Regulation No. 03/2009/CM/UEMOA).

This support to CORAF is consistent with the provisions of Article 4 of the Cooperation Agreement for seeds, between ECOWAS, UEMOA and CILSS, signed in Ouagadougou, Burkina Faso, on June 4, 2018 and which entrusts CORAF with implementing the harmonized regional seed regulation, for five (5) year period, renewable.

Under this mission, CORAF works closely with its regional partners, notably CILSS, through the Sahel Institute (INSAH), which administers the regional electronic data management platform for the development of the Regional Catalog of Plant Species and Varieties of West Africa and the Sahel (CREVAOS). This platform should allow for the online registration, on a permanent basis, of plant varieties released by the Member States of the three regional organization. During the edition of the previous catalogs, the national experts identified several weaknesses in the platform which is currently being improved. However, the weaknesses identified in the regional electronic platform are coupled with technical weaknesses among national actors. As a result, the plant varieties registered in the national catalogs of some country of West Africa and the Sahel did not meet the requirements of the harmonized regional seed regulations. According to the regulations, if a plant variety is to register in the national catalog of plant species and varieties, it must meet a number of technical requirements to be met by the candidate varieties released, i. e. conformity with the requirements for (i) the Distinctness-Uniformity-Stability testing, known as ” DUS testing “, and with (ii) the Value for Cultivation and Use (VCU) testing, known as ” VCU testing”. The lack of information on some important traits is an indication that the required tests have not been carried out in accordance with the regulations.

It is against this background that CORAF has issued this Call for Expression of Interest (CEI), to recruit a consultant, expert in conducting the required testing (DUS and VCU), to deliver a regional training for breeders and members of the National Seed Committees (NSC), responsible for the release of plant varieties, which ultimate goal is to: “improve the quality of the national catalogs of the countries of West Africa and the Sahel, and therefore, the Regional Catalog of Plant Species and Varieties”

The Executive Director of CORAF is inviting individual consultants with required qualification as described in the Termes of references to apply  for this recruitment.

Interested consultants may obtain further information from the Executive Secretariat of CORAF by sending an email to :  y.diallo@coraf.org.

The Consultant will be selected according the “consultant qualification method”  following the rules contained in the Administrative, Financial and Accounting Procedures Manual of CORAF.

Applications of the individual consultants will be evaluated based on the criteria mentioned above and the selected consultant will be invited for further discussion and negotiation.

Consultants interested in this call must submit an Expression of Interest highlighting the execution and experience of similar contracts and a detailed CV.

Expressions of Interest (EoI) must be submitted by e-mail to the following address: procurement@coraf.org not later than the 17 May 2021 at 4:00 p.m GMT.