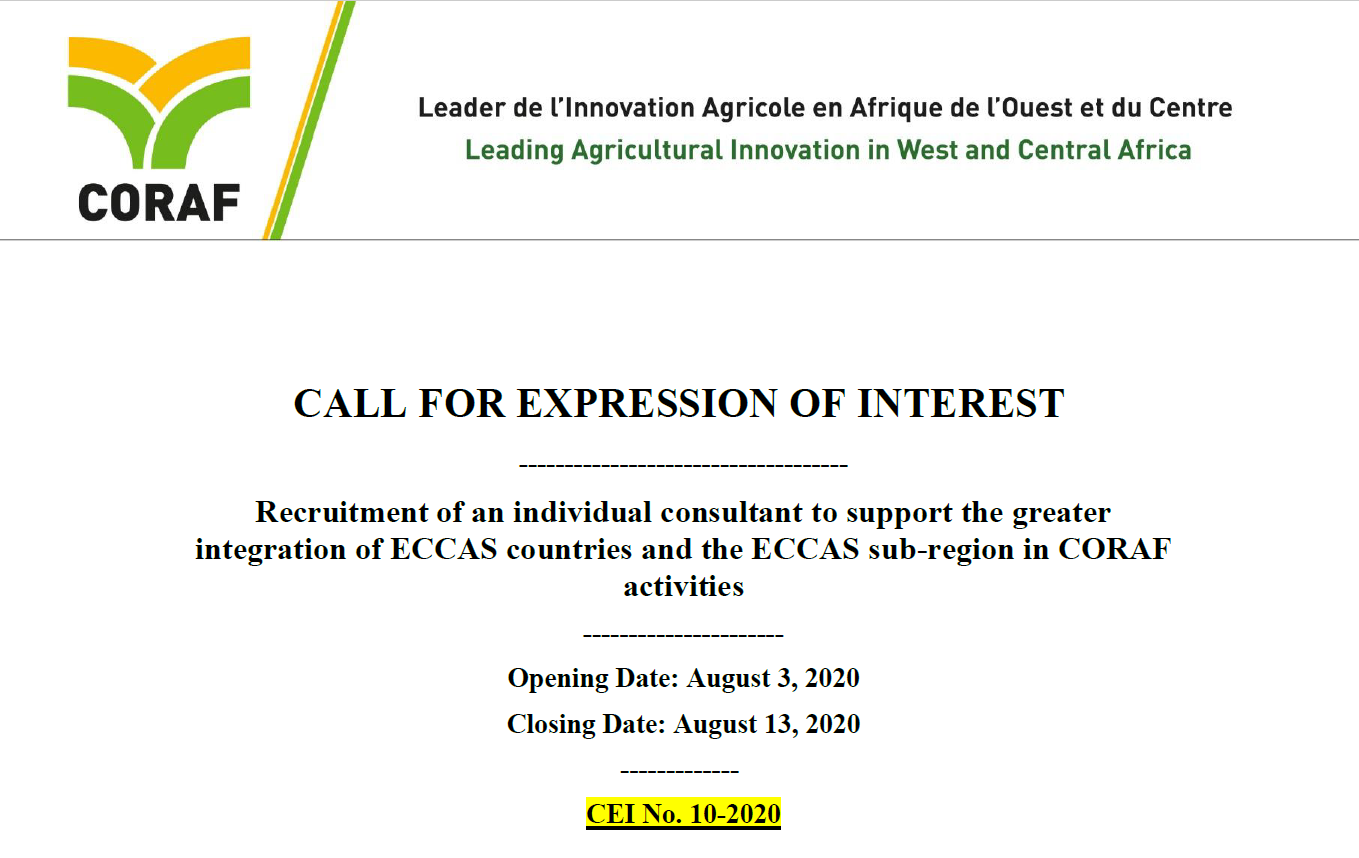 CORAF is an international non-profit association of national agricultural research systems (NARS) of 23 countries, covering over forty percent of Africa’s population, thus making it the largest sub-regional research organization on the African continent. The NARS of the CEMAC countries, except for Equatorial Guinea, are all founding members of CORAF. It was created in 1987 and assigned the responsibility to coordinate and facilitate ground-breaking and cutting-edge research outputs needed to unlock the agricultural potential of West and Central Africa. The vision and mission of CORAF are to achieve sustainable reduction of poverty and food insecurity through improved competitiveness, productivity, and agricultural markets in West and Central Africa.

The completion of several donor-funded programs such as the British Cooperation (DFID, 2013), the Australian Cooperation (AusAid, 2015), the common basket of programs between the European Union and Canada (MDTF, 2016) which covered all the countries in the CORAF region, and the financing gap of the second Operational Plan (2014-2018) have led to a refocusing of CORAF’s operations specifically in West Africa, thanks to projects dedicated to ECOWAS countries, following the example of PAIRED, UEMOA and WAAPP (2A, 1B and 1C). ECCAS and CEMAC have adopted a Common Agricultural Policy (CAP-CEEAC/CEMAC) with the main objective of “contributing substantially and sustainably to meeting food and nutritional needs, increasing exports and incomes, and reducing poverty among rural populations in the member states”.

CORAF’s presence in Central Africa remains less pronounced, despite having strongly supported the creation of two important base centers in the sub-region: the Regional Hub for Applied Research on Central African Agricultural Systems (PRASAC) in 1996 and the African Centre for Research on Bananas and Plantains (CARBAP), which became an intergovernmental organization in 2013, and the first Regional Center of Excellence in Central Africa. New sub-regional projects are being developed in ECCAS, to which CORAF could contribute with its experience in supporting regional programs. The Support Project for the Promotion of Youth Entrepreneurship in Rural and Peri-Urban Areas of Central Africa (PREJAC) is the most mature project that has been submitted to the African Development Bank (AfDB) for funding.

Lastly, in an international environment shaped by climate change, emerging animal and plant diseases, and very recently by the COVID-19 pandemic, a context that requires regional, international, and even global approaches, this consultation intends to propose actions to be undertaken to improve the visibility of CORAF and consolidate its presence in Central Africa for the development of competitive and sustainable agriculture, and the improvement of market access to small producers.

The Executive Secretariat of CORAF intends to recruit an individual consultant to support the greater integration of ECCAS countries and the ECCAS sub-region in CORAF activities.

The tasks to be performed and other information related to the conduct of the mission are detailed in the terms of reference attached.

The Executive Director of CORAF invites Consultants with the qualifications demanded as indicated in the terms of reference to express their interest in this call.

Interested consultants in this call must provide information indicating that they are qualified to perform such services (CV, references relating to the execution of similar contracts, publications, experience in a similar field, etc.).

Qualified consultants will be selected according to the rules contained in the CORAF Administrative, Financial and Accounting Procedures Manual.

Interested consultants can obtain additional information from the CORAF Executive Secretariat by sending correspondence by e-mail to n.amoah@coraf.org .

Proposals must be submitted by e-mail to the following address: procurement@coraf.org no later than August 13, 2020 at 4.30 p.m. GMT at the latest.