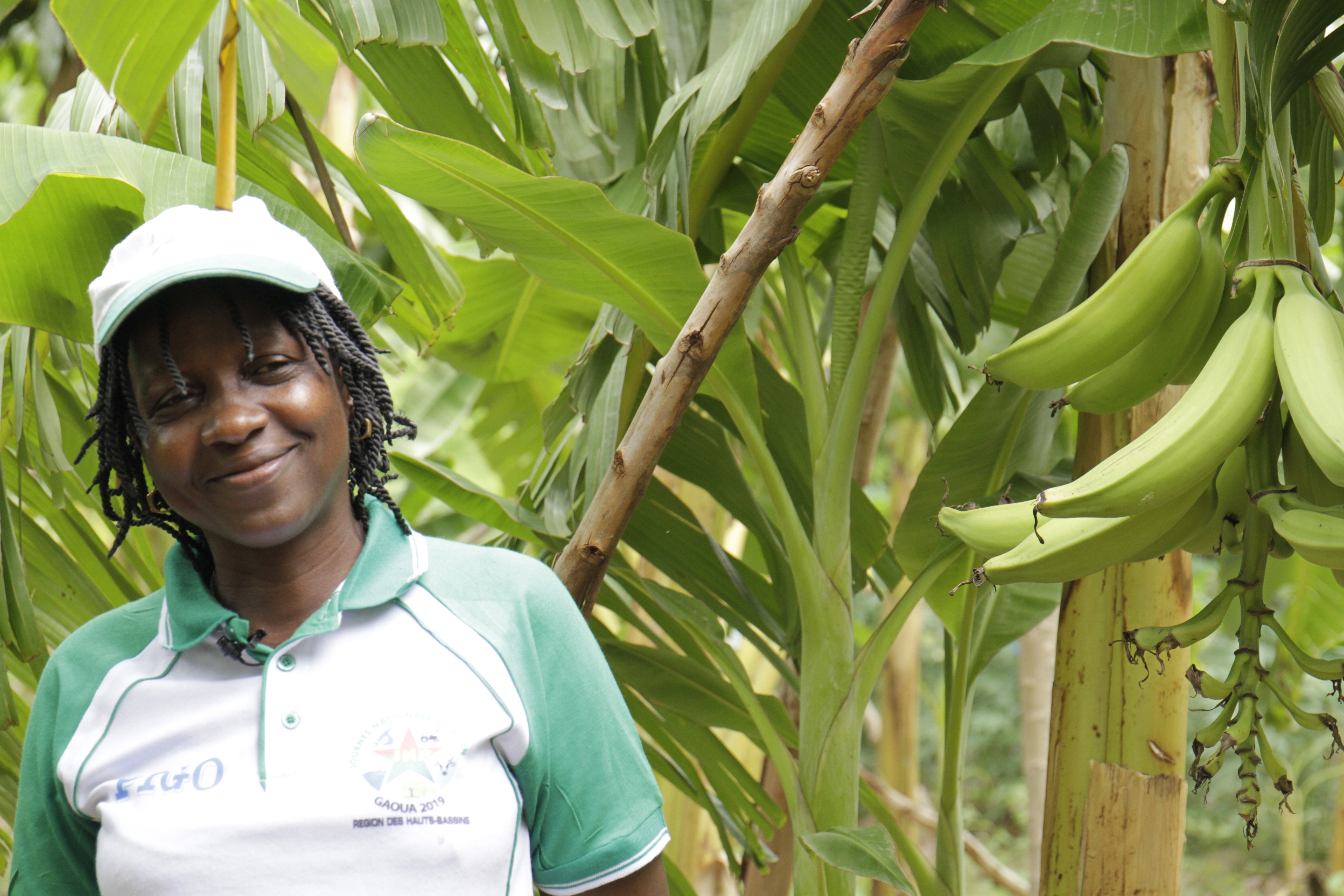 By 2014, farmers in Burkina Faso had little experience cultivating plantain.

“Plantain cultivation in Burkina Faso was rare at the time,” says Paul Iboudou, a veteran research technician with the Western region of the Agricultural and Environmental Research Institute of Burkina Faso (INERA).

47 years-old agripreneur, Mrs. Kassongo Sylvie was one of the first producers on whose farm the three varieties were tried in 2014.

Five years later, she has expanded production to two hectares of land, generates significant income from sales, and has also seen a substantial improvement in her livelihood. The returns on her investment are so encouraging that she plans to expand further if she gets credit, land as well as a reliable irrigation system.

“There are many other producers across Burkina Faso who have turned to plantain production based on my experience,” says Mrs. Kassongo.

“There is a demand as well as high-preforming cultivars. What is lacking is land and finances to expand our operations,’ explains Kassongo.

Like in other parts of West Africa, banks or micro-credit financial institutions do not provide enticing loan and credit packages for smallholder farmers or producers.

“It is so difficult to obtain loans from the banks. They often argue that our products are perishable, and, in some cases, we cannot afford the required guarantees,” concludes Kassongo.

Science has churned out in the past decades, high-yielding disease-resistant plantain hybrids. What is left is to upscale of the technologies.

The adoption of the new plantain cultivars in Burkina Faso is real, according to INERA.

“We are seeing farmers traveling 600 kilometers to obtain the new hybrid varieties. There is enthusiasm and interest. This is because of the positive results,” says Iboudou.

Burkina Faso is located to the north of Cote d’Ivoire. Though mostly Sahelian with impacts of desertification and climate change apparent, science has still made it possible to grow plantains even in the off-season.

“The varieties have improved agronomic characteristics. With an excellent system of irrigation and plant management, it is possible to grow plantain in Burkina Faso including offseasons,” says Iboudou.

“Should all parties come together, it is possible that Burkina Faso produces enough to stem imports and why not consider exporting in future,” argues Iboudou.

Plantains constitute a significant source of carbohydrates for millions of people in across West and Central Africa.

Between 2012 and 2016, new plantain cultivars were propagated and distributed to farmers in Benin, Burkina Faso, Côte d’Ivoire, and Togo under the West Africa Agricultural Productivity Program (WAAAP) coordinated by the West and Central Africa Council for Agricultural Research and Development (CORAF).

Further dissemination and adoption of these plantain hybrids will enhance the sustainable intensification in plantain-based farming systems across the humid lowlands of West and Central Africa, according to a recently published scientific paper.