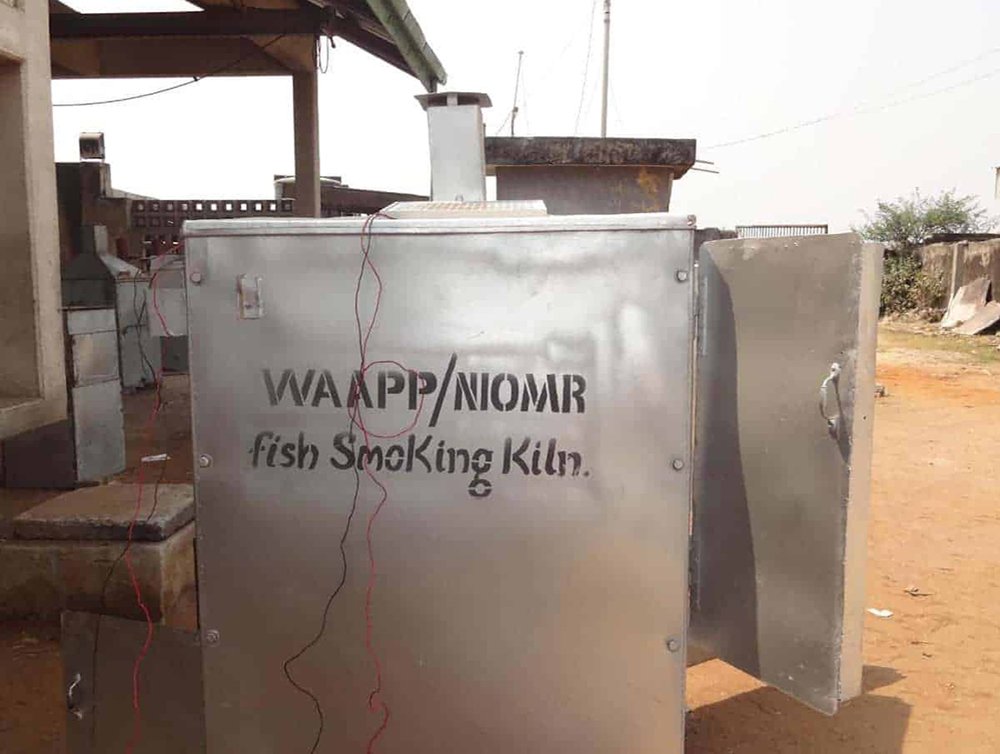 A fish smoking kiln from the Nigerian Institute for Oceanography and Marine Research (NIOMR) is helping transform the lives of West Africans who depend on fishing for their livelihoods.

Comprised of a smoking chamber, a fan to distribute heat, a thermometer to control temperature, and a chimney to filter air, NIOMR’s fish smoking kiln reduces cooking and smoking time from four days to just four hours. The fish smoking kiln eliminates many challenges West African fisheries typically encounter with traditional smoking methods—including lack of control over the drying process, exposure to dirt and dust, insect infestation, exposure to contaminants, and low capacity.

“We looked at the old ways of doing their smoking, and we were able to identify that there were clearly a lot of challenges,” says Dr. Oludare Adeogun, Research and Development Scientist at NIOMR and Coordinator of the National Center of Specialization on Aquaculture. Soon after farmers and producers begin to use the kiln to mitigate these challenges, “they can see the impact of the smoking kiln, and they love it so much,” says Adeogun.

“When you smoke your fish very well, you can make more money than when you sell it fresh,” explains Adeogun. Not only is smoked fish more valuable, but it also lasts longer. In rural fishing communities, post-harvest losses comprise as much as 40 percent of total catch due to inadequate processing and preservation techniques, limiting the incomes of fish processors in the community.

According to NIOMR, using the fish smoking kiln can reduce post-harvest losses by 70 percent and rapidly increase incomes for the 5 percent of people depending entirely on the fisheries sector for their livelihoods in West Africa.

NIOMR uses a participatory approach to keep modifying the fish smoking kiln. While their project to create the kilns began in 1997, NIOMR continues discussing kiln features with farmers and producers to improve the equipment. In response to user feedback, researchers experimented with new features like detachable or mobile equipment; charcoal, gas, and electricity as sources of energy; and an oil collector to divert fish oil away from the fire.

Adeogun notes that the oil collector serves users in two ways. “We also discovered that the oil from the fish normally dropped directly into the fire—if this happens, it can boil the fish[….] So now we introduced a new oil collector to the new edition,” explains Adeogun. “This is also an additional revenue because we can sell it.”

Currently, fish producers in Benin, Cote d’Ivoire, Gambia, Ghana, Nigeria, and Senegal use the technology. NIOMR disseminates the fish smoking kilns throughout West Africa with a participatory approach, training fabricators “on this smoking kiln, so they can also produce it and sell it as well—we try to empower users,” says Adeogun. NIOMR focuses on training youth and women to be fabricators, as these groups already contribute most labor to fish processing.

Adeogun explains although Nigeria most widely uses the fish kiln, other countries are not far behind: “they see the impact that it is making on the life of the people. It has a positive impact in this country.”

The original article was published on Foodtank