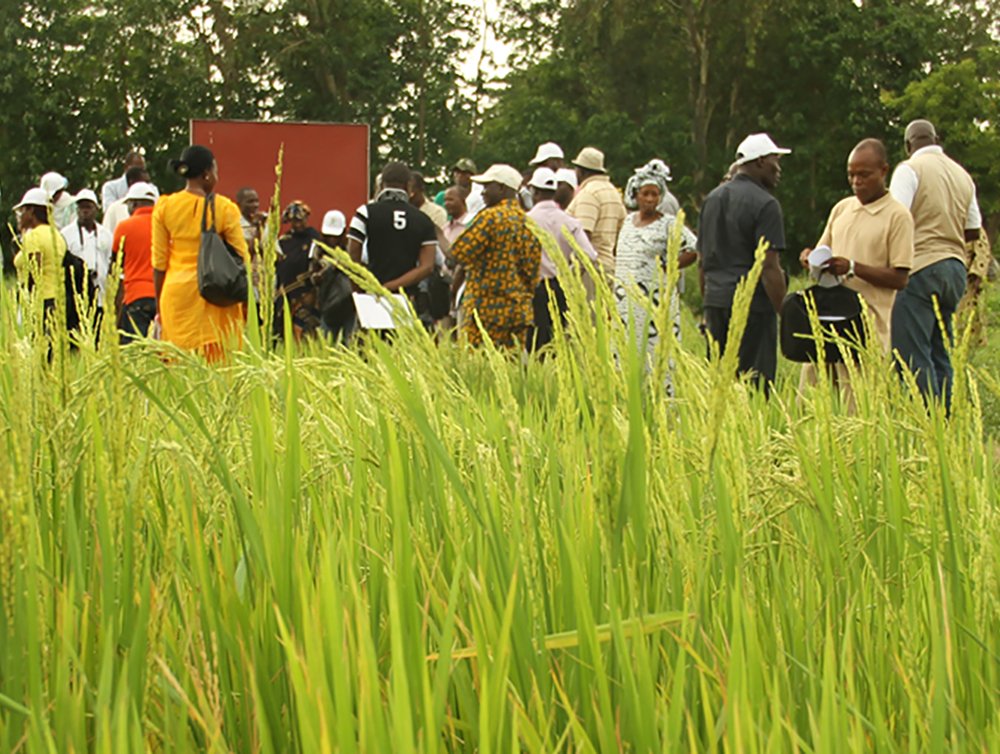 The System for Rice Intensification (SRI) has tremendous potential to close the rice production gap in West Africa and to place the region on the desired trajectory of rice self-sufficiency, according to a new book published on Wednesday, April 18, 2018 in Dakar, Senegal.

What was the Impact of the Project?

An independent socio-economic impact assessment of the project shows that SRI practice produced results much superior to conventional rice production practices, showing increased yields of 54% under irrigated systems, 65% in the rain-fed lowlands, and 153% in the rain-fed upland systems. Similarly, the average income for farmers using SRI was 41% higher than for those using conventional practice. The study concluded that the project “has proven that SRI can contribute successfully to improving agricultural productivity in West Africa.”

“These are impressive results making this project one of the most successful in the CORAF portfolio,” says Dr. Abdou Tenkouano, Executive Director of CORAF.

“This SRI project has been groundbreaking in its participatory design and implementation. It is the world’s largest SRI project to date with its extensive geographic coverage.”

The ‘Improving and Scaling Up the System of Rice Intensification (SRI) in West Africa’ (SRI-WAAPP) project was part of the West Africa Agricultural Productivity Program (WAAPP), funded by participating countries under a regional competitive grant scheme managed by CORAF. The regional project coordination was assured by the National Center of Specialization in Rice based in Mali in collaboration with Cornell University, USA.

SRI is an agro-ecological, climate-smart, and low-input methodology developed in Madagascar in 1980s and practiced today successfully in more than 50 countries. By planting young, single seedlings with wide spacing, by keeping soils moist but not flooded, and by enhancing soils with compost and other sources of organic nutrients, the plants become stronger and more productive. This translates in increased yields, often by more than 50%, while using 90% less seed, 30-50% less irrigation water, and less agro-chemicals. Practices can be adapted to local conditions and diverse rice systems. In West Africa, adaptation to lowland systems was highly successful.

Rice is one of the primary staple food for most of the 430 million people living in West and Central Africa. Its sustainable production and transformation are crucial to the food and nutrition security of the region. Other major staples include maize, millet, sorghum, and wheat.

While overall rice production in the 13 countries increased by 24% from 2010 and 2016/17 to 9.9 million tons of milled rice, rice consumption was growing by 35%, faster than expected. Self-sufficiency rate in 2016/2017 reached 54%. The goal set by the “Regional Rice Offensive” of the ECOWAS States is to reach rice self-sufficiency by 2025, producing the 24 million tons of milled rice that are projected to be consumed in the region.

“If SRI is to make a real contribution to rice self-sufficiency in West Africa, many more farmers must adopt it,” say the book authors, Dr. Erika Styger, technical lead for the Regional Coordination of the project and Associate Director for Climate-Resilient Farming Systems at Cornell University, and Dr. Gaoussou Traoré, Regional Coordinator of the project and Coordinator of CNS-Rice.

“How many farmers must be reached before we reach the “tipping point” where SRI becomes the standard for rice cultivation in West Africa? A possible target for the follow-on project could be a farmer adoption rate of 33%, reaching 1.5 million rice farmers and 2.43 million hectares.”

Rice self-sufficiency would be a reality in West Africa if all farmers adopt the practice.

As calculated by the authors “If 100% of rice farmers in West Africa had used SRI in 2017, rice self-sufficiency would already have been achieved with a 5% surplus. Replacing rice imports with rice grown in the region would have saved 4.16 billion USD in foreign exchange for 2017 alone,”

What are the Recommendations?

Based on the needs expressed by the project stakeholders in the 13 countries, the authors recommend to apply a medium-term vision and support for continued scaling up of the SRI practice:

Download the book for free and find more information.