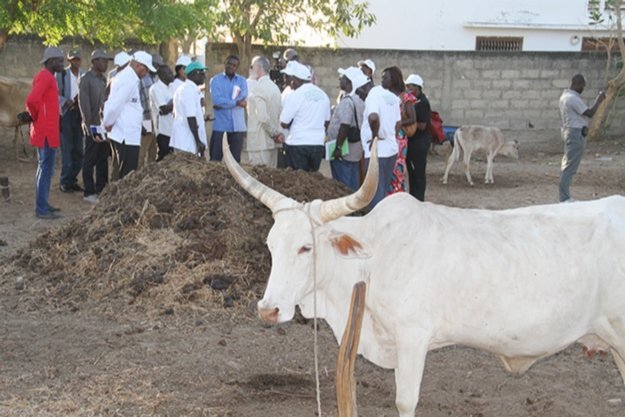 Within the framework  of the follow-up of the research and development projects funded by the EU, Joaquín González-Ducay, EU Ambassador in Senegal and Dr. Paco Sérémé, Executive Director of CORAF visited two dairy farms in the region Kaolack and met stakeholders and partners of the innovation platform set up within the AMPROLAIT Project. This 24-hour visit was useful to evaluate  the project’s impact in terms of increasing income and reducing poverty in rural areas. The event took place from 17 to 18 March 2016 in Dakar and Kaolack.

The two delegations from the EU and CORAF exchanged with Theophilus SARR producer who runs a semi-intensive dairy farm in Sibassor. There is also an improvement in the nutritional status of the entire family of the farmer and consumers. The project enabled him after 4 years to improve his income by selling milk from a profit by 2000 f to 5000 f CFA per day.
The second producer visited was Birame FALL, a modern breeder in Medina (Kaolack). The project has enabled him improve milk production and thus improve his income. This is an example that has been acknowledged by the Ambassador of the EU, since this producer was an immigrant in Italy. He returned to invest in livestock.
Joaquín González-Ducay welcomed the main achievements of the project, adding that “these initiatives should be leveraged to reduce immigration. Valid arm immigrate outside Africa. We should encourage entrepreneurship as a bearer of hope in Africa. I encourage young people to stay in Africa because their future is here. “
The delegation led by CORAF Executive Director Dr Paco Sérémé, welcomed the EU initiative to discover the achievements of the projects it has supported since 2011. He expressed the hope that “the results will be shared with a larger number of recipients for a real transformation of agriculture in West and Central Africa. “
Before the visit to Kaolack, the EU delegation had a working session with leaders of CORAF who shared the overall results of the projects that are financed by EU. Aspects of financial and technical governance were shared with the EU Ambassador in Senegal. It was on March 17, 2016.

Since 2011, the EU funds CORAF/WECARD for an amount of more than 7 billion FCFA (11.475 million euros). To date, 17 research and development projects are implemented in 20 countries in West and Central Africa and regionally coordinated by CORAF/WECARD.

The European Union (EU) supports the CORAF/WECARD through the Multi Donor Trust Fund (MDTF). This is a funding mechanism facilitated by the World Bank, which aims to contribute to sustainable improvements in productivity, competitiveness and agricultural markets in West and Central Africa.