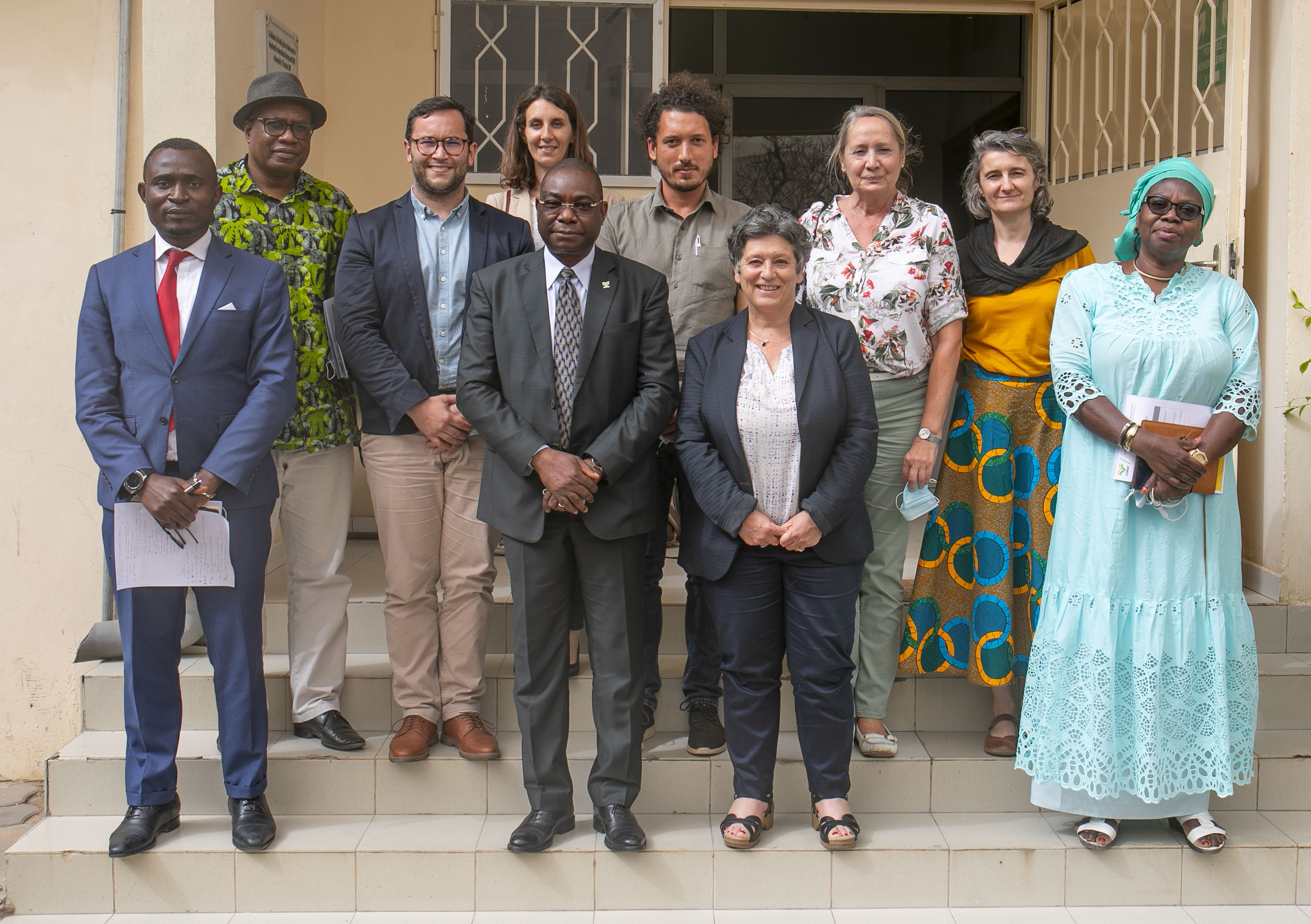 The Chief Executive Officer (CEO) of the French National Research Institute for Sustainable Development (IRD) visited the Executive Secretariat of CORAF on Friday, June 04, 2021. On the agenda was a discussion on potential synergies and ways to improve the collaboration of the two leading research organizations.

Dr. Valerie Verdier’s led a delegation of six IRD officials, including the Resident Representative of the Institute in Senegal and Mauritania, Dr. Isabelle Henry.

During the short working session, the Executive Director of CORAF, Dr. Abdou Tenkouano, underlined the importance of partnerships to achieve the shared goals of both institutions to enhance food and nutrition security.

Without research and strong partnerships, we cannot solve the numerous challenges facing the food system today”

IRD is a leading research player in the world and works in many countries in Africa. As such, the Executive Director of CORAF called on the CEO of IRD to work together.

“I would like us to establish a roadmap to allow the two organizations to work together better,” said the Executive Director of CORAF.

Dr. Tenkouano argued that a better and more active partnership between both organizations would be beneficial, particularly to resolve particular challenges linked to the lack of local expertise in National Agricultural Research Systems (NARS).

“We work with the NARS centers in twenty-three (23) countries, and it turns out that local expertise alone is not sufficient. When we call on international expertise, we can have a critical mass of researchers for more impact.”

The CEO of IRD praised CORAF’s efforts in the sub-region in advancing agricultural research and development.

“I have the opportunity through several missions to appreciate all the work that CORAF is doing in the countries it covers,” said Dr. Valerie Verdier.

In acknowledging the collaboration deficit among the two institutions, the IRD Head called for greater partnership moving forward.

I hope that in the future, IRD will collaborate better with CORAF. I hope we work better together, have a common roadmap, and jointly mobilize funding to tackle joint projects”

Amplifying the voice of the CEO, the Resident Representative of IRD in Senegal and Mauritania recognizes that CORAF would be a strategic partner which will make it possible to change the situation in agricultural research, especially in Mauritania, where the challenges are more significant.

“I need partners for Mauritania where the task is great, and a partner like CORAF will be able to help attract Mauritanian researchers to create links and projects and to boost certain areas at the country level,” said Dr. Isabelle Henry.

Dr. Valerie Verdier is a Plant pathologist and Doctor in Plant Sciences from Paris-Sud University. She was appointed CEO of IRD on February 12, 2020. She takes over from Jean-Paul Moatti whose mandate ended in 2019.

Her trip to Senegal is the first international trip since her appointment.

The history of CORAF and IRD goes back to the origins of CORAF. In 1987 1987, there was a meeting between the directors of fifteen (15) agricultural research institutions of West and Central Africa and of Madagascar, and colleagues from French research institutions, especially, at that time, the Center for International Cooperation in Agricultural Research for Development (CIRAD), the National Institute for Agronomic Research (INERA) and the Overseas Scientific and Technical Research Office (ORSTOM), now replaced by IRD.