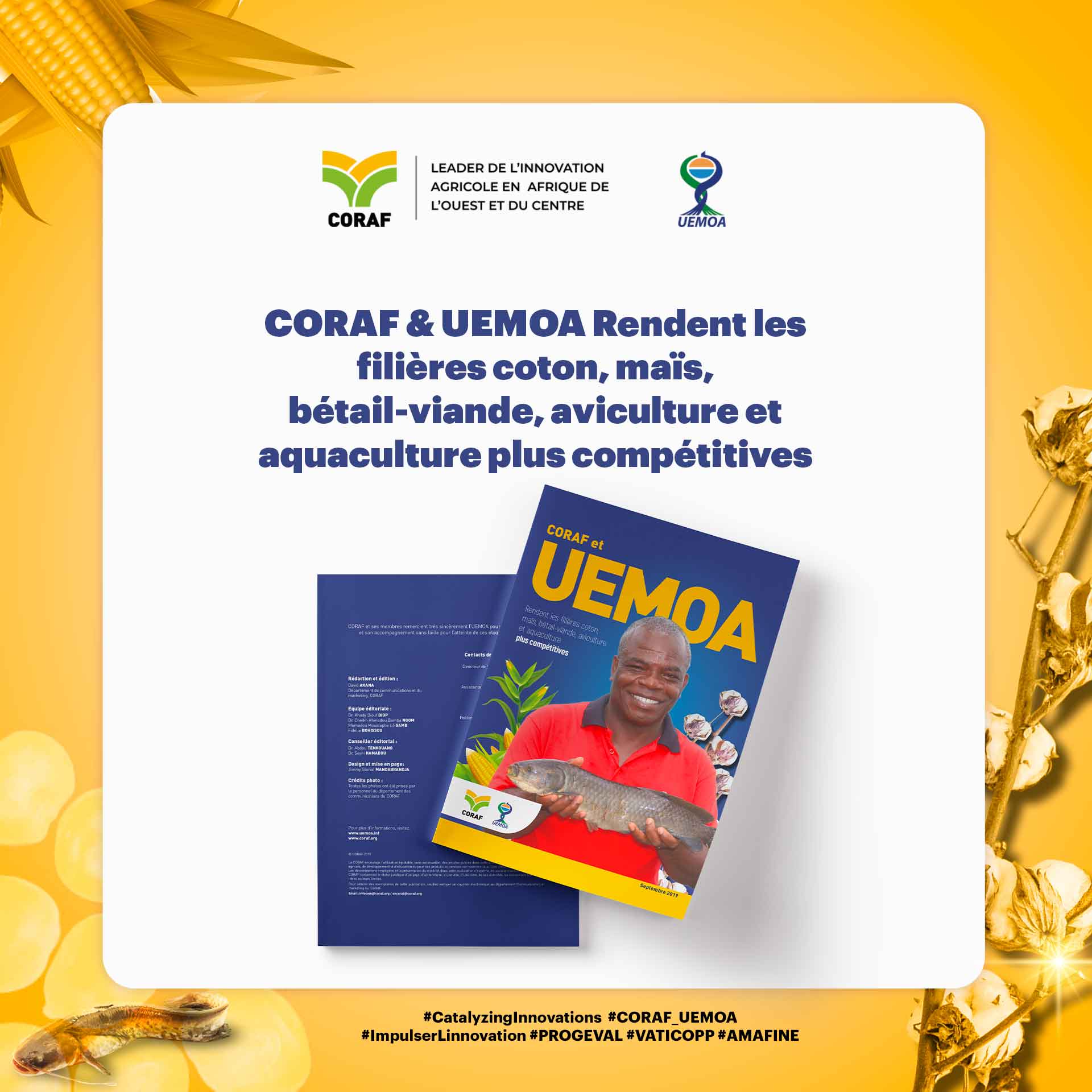 According to a new report, west African cotton, maize, livestock, aquaculture, and poultry sectors are more competitive and yield higher income for smallholder farmers today than they were just a few years ago.

UEMOA is a customs union composed of eight countries (Benin, Burkina Faso, Cote d’Ivoire, Guinea-Bissau, Mali, Niger, Senegal, and Togo). The food economy of the Union member countries is currently estimated at USD 43 billion representing close to 30 percent of the gross domestic product. This makes the food system a major pillar of all eight UEMOA economies.

From Benin through Cote d’Ivoire, to Burkina Faso, smallscale farmers have substantially improved their fortunes as a result of adopting proven innovations disseminated by CORAF and national partners from research institutes.

“For us, these results significantly meet our expectations,” says Mr. Abdallah Boureima, President of the UEMOA Commission.

In 2014, the UEMOA Commission funded CORAF to improve the maize, cotton, livestock, poultry, and aquaculture sectors through research.

“This investment has considerably strengthened the resilience and livelihoods of beneficiaries in the UEMOA community,” says Dr. Abdou Tenkouano, Executive Director of CORAF.

What are the Main Results of the project?

Most of the technologies generated throughout the project were disseminated through innovation platforms. These are locations for the informal exchange, learning, sharing, and adoption of agricultural technologies, innovations, and best practices among the major food chain players in a given community.

In total, fifteen innovation platforms were set up and operating in all the eight countries of UEMOA. About 5500 people interacted on these platforms representing 27 percent of women, according to the report.

Emile ADIMOU is the President of an innovation platform bringing together actors in the cotton sector in Benin. Benin, Mali, and Togo were involved in diffusing an innovative technology to transform cotton stalks to particle boards. The result of which has made a hitherto worthless residue into an income-generating activity.

“I think this is a good initiative that will help reduce poverty and increase the revenue of women and youths in Benin, says Emile ADIMOU.

“Fish farming saved my life and that of my family,”

Close to a quarter of the total investment (USD 500 million) was dedicated to understand the genetic composition of sheep, cattle, guinea fowl, tilapia, etc. as well as boost their production.

The research outcomes of the livestock part of the project contributed to the uptick in the incomes and livelihoods of fish farmers of the region and particularly in Cote d’Ivoire.

Fifty-four years old Ivorian, Klodan Sanogo was one of the beneficiaries of the fish farming technology.

“Fish farming saved my life and that of my family. Since I received new feed and fingerlings, my production has increased substantially,” says Klodan Sanogo.”

Besides improving incomes, one of the most consequential unintended impacts of the project ended up being the strengthening of social bonds among previously antagonistic tribes.

Cote d’Ivoire experienced a brutal civil crisis following the 2010 elections. Between December 2010 to April 2011, about 3000 people are reported to have been killed as a result of a stand-off over the winner of the presidential elections.

The project also contributed to preparing the future generation of scientists in West Africa. Overall, 25 students obtained masters and Ph.D. degrees thanks to the project – of which 36 percent are women.