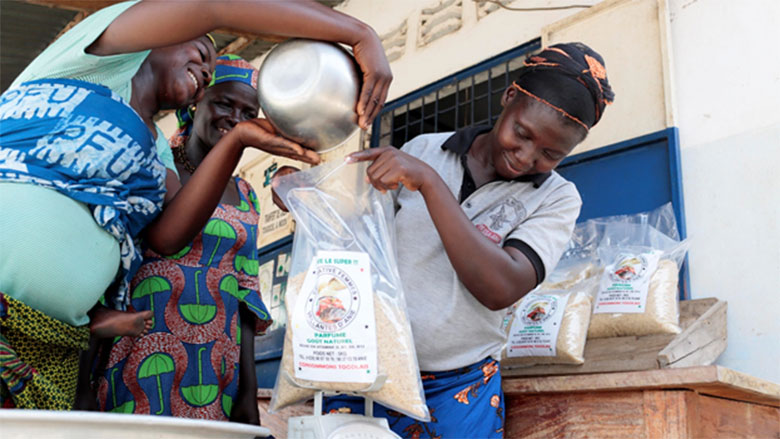 Anié, January 28, 2020-It is market day in Anié, a commercial city 200 kilometers north of Lomé. The breakfast crowd is even bigger in front of Anifa Aboubacar’s stall.  Customers of all ages are lining up for her “watché.” For more than 20 years, she has prepared this African fried rice garnished with fried white beans and peppers every day. This dish is very popular in several West African countries. And she does not alter the recipe, stating that “true watché is made with parboiled rice. Here in Anié, we have always remained faithful to this tradition.”

“I am a widow and I am finally able to provide for my family. Most important, I manage to pay the education expenses of all my children,” Mrs. Kadokalih, A member of the cooperative.

Better quality rice that is easier to produce

Steamed after harvesting to preserve its vitamins and minerals, parboiled rice is no secret to the women of Anié, as most of them have excellent skills in the traditional processing of local rice. However, one group of women stands out—the Femmes Vaillantes of Anié. This cooperative, created in 2007 by 12 farmers, produces premium parboiled rice. Ebiro Kadokalih, President of the association, explains that “in the past, we parboiled rice by directly pouring unhusked rice into a pot filled with water, a technique that led to a great deal of loss and residue. However, we now have a real parboiler that allows us to produce cleaner rice with no breakage.”

This upgraded parboiler was given to them by the West Africa Agricultural Productivity Program (WAAPP), which also trained them in the production of premium quality parboiled rice. The results speak for themselves. Ebiro and her colleagues have almost tripled their output, producing 800 kilos of parboiled rice per week, with no losses. The work has become less arduous, less dirty, and faster. The time saved has allowed them to focus on the packaging and presentation of their rice currently sold under the brand name “Parboiled Rice by the Femmes Vaillantes Cooperative of Anié” (Riz étuvé de la Coopérative femmes vaillantes d’Anié).

Wealthier customers who come from afar

For Ebiro, this marketing effort is attracting wealthier and more demanding customers.  “We deliver mainly to the residence of the Religious Sisters of Anié and we are increasingly getting customers who are coming from Lomé, the capital,” she states.

Sister Georgette, the Superior of the Franciscan Sisters’ residence in Anié states that “I now buy rice only from Femmes Vaillantes, which I discovered when I came to Anié two years ago.  I like the quality and the taste. I also help the cooperative supply many other congregations who ask me about the rice when they taste it at my residence.”

For the time being, the cooperative’s office and its production site are on the President’s family compound. However, Femmes Vaillantes is thinking big and plans to build a large processing center.

Using the profit derived from the increase in its sales volume, the cooperative has bought two hectares of land in the small village of Sevia, roughly 10 kilometers from Anié, with the goal of increasing its production. WAAPP has once again come to the rescue. Ekouya Adoukonou, President of the monitoring committee of Femmes Vaillantes, which now employs two seasonal workers to plow and maintain the community field, states that “the project helped me get training in Mali in intensive rice-growing techniques. When I returned, I trained the other members of the cooperative, particularly in the transplanting technique, which allowed us to move from two to seven metric tons of rice per hectare.”

Ekouya, Ebiro, and their colleagues experience less uncertainty in their daily lives since their cooperative became a small and dynamic enterprise.  “I am a widow and I am finally able to provide for my family. Most important, I manage to pay the education expenses of all my children,” states Mrs. Kadokalih, a member of the cooperative.

With financing of $32.8 million from the World Bank through the International Development Association, the West Africa Agricultural Productivity Program (WAAPP) has already provided assistance to 10 rice parboilers’ cooperatives managed by women and directly impacted the lives of more than 227,000 Togolese women. 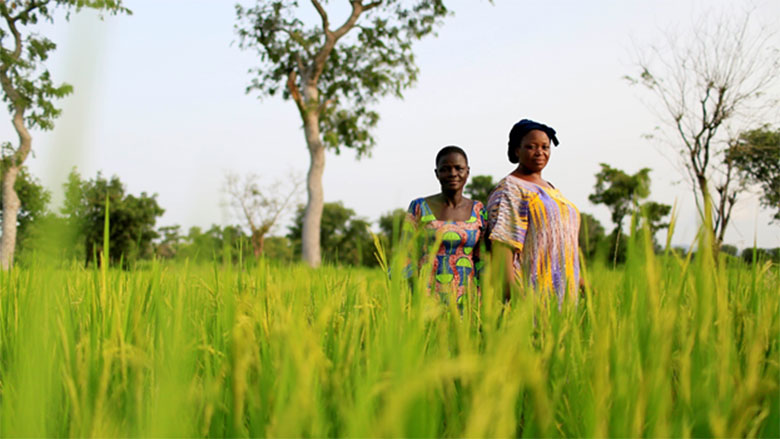