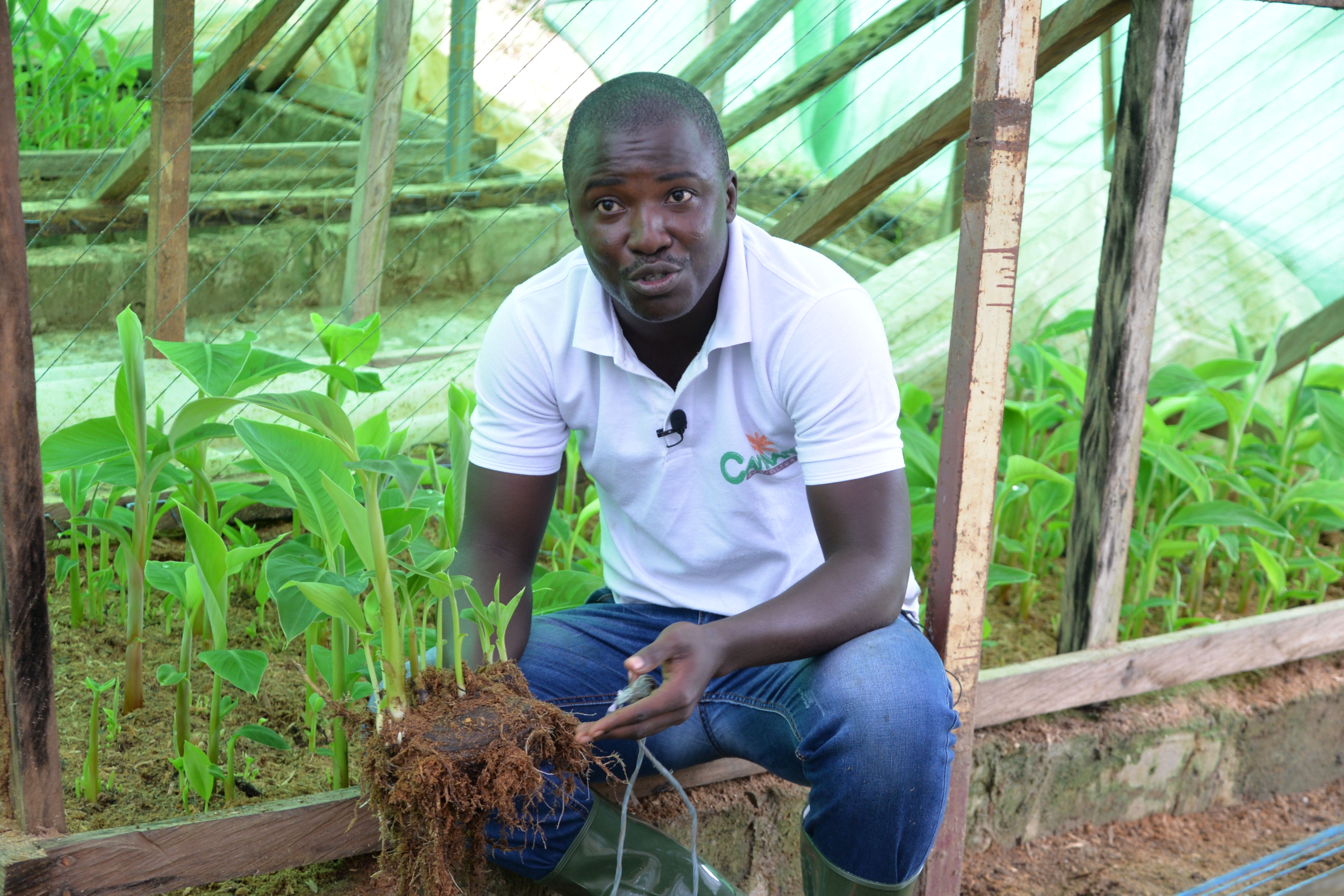 Canaan Agriculture Sarl belongs to a 32-year-old Ivorian, Narcisse Aman, one of the nurserymen trained under the West Africa Agriculture Productivity Program (WAAPP) in Cote d’Ivoire.

“The 2018 figures represent the best annual turnover since the creation of our company,” says Aman.

When we met Aman in early September at one of his plantain nurseries in Anekouadiokro village located about 200 kilometers north of Abidjan, Aman looked relaxed but determined to expand his business in the years to come. “Based on projections, we are likely to perform better than in 2018.”

For a company that started barely five years ago, this represents a specular growth and speaks to the untapped potential of entrepreneurship in the agriculture industry in Cote D’Ivoire and Africa overall.

“Today, our client base has expanded to the West Africa region. I have delivered banana plants to Benin and Mali,” he says.

“Today, we have expanded operations to include the creation and maintenance of banana and plantain plantations as well as providing advisory services.”

“We now get more income providing these sorts of advisory services,” he said.

“We are now also opening a seven-hectare banana farm and our plans to expand to 15 hectares in 2020.”

In 2013, Narcisse Aman had just about completed his master’s degree in the Félix Houphouët-Boigny National polytechnic institute in Yamoussoukro – the political capital of Cote d’Ivoire. Like most young Ivorians, he sought employment in already-established companies.

With knowledge of agricultural technology and his drive, he worked for two local agro firms – Dsoo/Sapv and later Agronomix S.A serving as Chief of Exploitation and Heads the Farms Department respectively.

For most youths, seeking employment in established companies is usually the likeliest option after graduation as it comes with some level of security. Aman was not different, so he joined these companies and stayed there until 2016.

While working for these corporations, Aman was also exploring ideas and business options in the plantain and banana value chain in Cote d’Ivoire. Banana and plantains are the fourth most important food crop in Côte d’Ivoire after yams, cassava, and rice.

At the time, the Ivorian government, through a loan from the World Bank was investing massively in the generation of plantain and banana related innovations. Under the West Africa Agriculture Productivity Program (WAAPP), the Ivorian government accepted to host a national center of specialization focusing exclusively on generating technologies to advance productivity in plantain and banana not only for farmers and producers in Cote d’Ivoire but for the whole of West Africa.

Under this program, five technologies were generated by the national agriculture research system in Cote d’Ivoire. This includes the plantain plant derived from stem fragmentation (PIF). This technology allows the production of healthy plantain plants in 3-4 months and at any period of the year.

“The advantage of the PIF technique lies in the fact that the infrastructures required for its implementation are simple, inexpensive and accessible to all producers,” says a study on this technology published in the International Journal of Environment, Agriculture, and Biotechnology.

Ivorian researcher, Dr. Amoncho Adiko of the publicly-funded National Agricultural Research Center, and other researchers devised the PIF in Cote d’Ivoire. Like most researchers, their focus was to deliver the technology. The Interprofessional Fund for Research and the Agricultural Advisory, the implementing body of the WAAPP in Cote d’Ivoire took charge of the dissemination of the technologies among targeted communities.

“The WAAPP training was the defining moment. It changed everything for me,” admits Aman.

“After the training and the knowledge acquired, I started with three explants where I could develop seeds in the firm of vivoplants,”

Today, Aman runs close to 60 of those across different locations in Cote d’Ivoire. He hires about ten employees with many more seasonal employees. He has two kids with a fiancée. 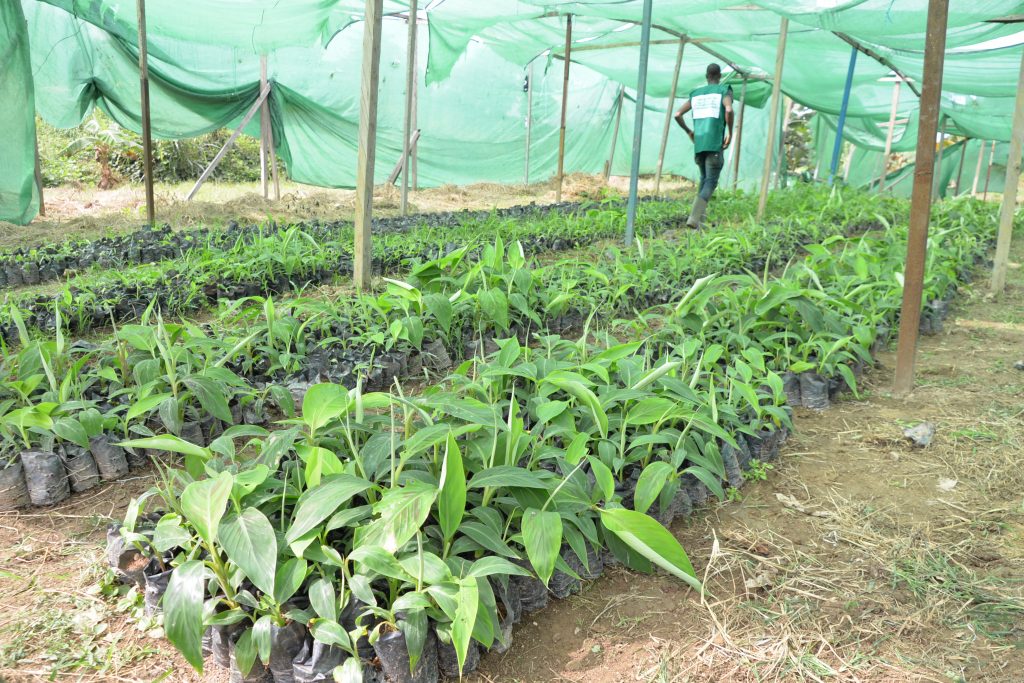 Sounding out Other Youths

Agriculture entrepreneurship, experts argue has immense potential and represent a considerable source of employment of the jobless youths across Africa. But, the trends in West Africa have instead shown many youths traveling abroad in search of better economic opportunities or engaging in white-collar jobs.

“My advice to youths is that it is possible to be gainfully-employed in the agriculture sector. You must first of all love what you are doing,” he says when asked what drives him.

“I love what I am doing. The greatest satisfaction I derive today is not the money. It is not all about money. Instead, it is the fact that I can help other youths grow.”

Other Achievements of the WAAPP in Cote D’Ivoire

The WAAPP in Cote d’Ivoire sponsored post-graduate studies for 78 scientists, extensionists, and other specialists who are today helping to advance the research and development agenda of the country as well as that of the West Africa region.

Overall, the WAAPP reached out to 9 million people directly across West Africa and an additional 56 million people indirectly. It generated 200 technologies.

“The story of Narcisse Aman and many others success stories we have documented before speak to the considerable contribution of the WAAPP towards lifting people out of poverty and creating new blue-collar jobs across our region,” says Dr. Niéyidoub Lamien, the man who had the arduous responsibility of ensuring the successful implementation of the WAAPP in the past decade.

“The WAAPP may have long ended in many countries. But stories as this point to the fact the vision of the Economic Community of West African States (ECOWAS) in setting up this program was the right one,” added Dr. Lamien.

ECOWAS initiated the WAAPP. CORAF was assigned the responsibility for regional coordination.

The ongoing iteration of the program ends on December 31, 2019, in Benin, Guinea, Niger, and Togo.