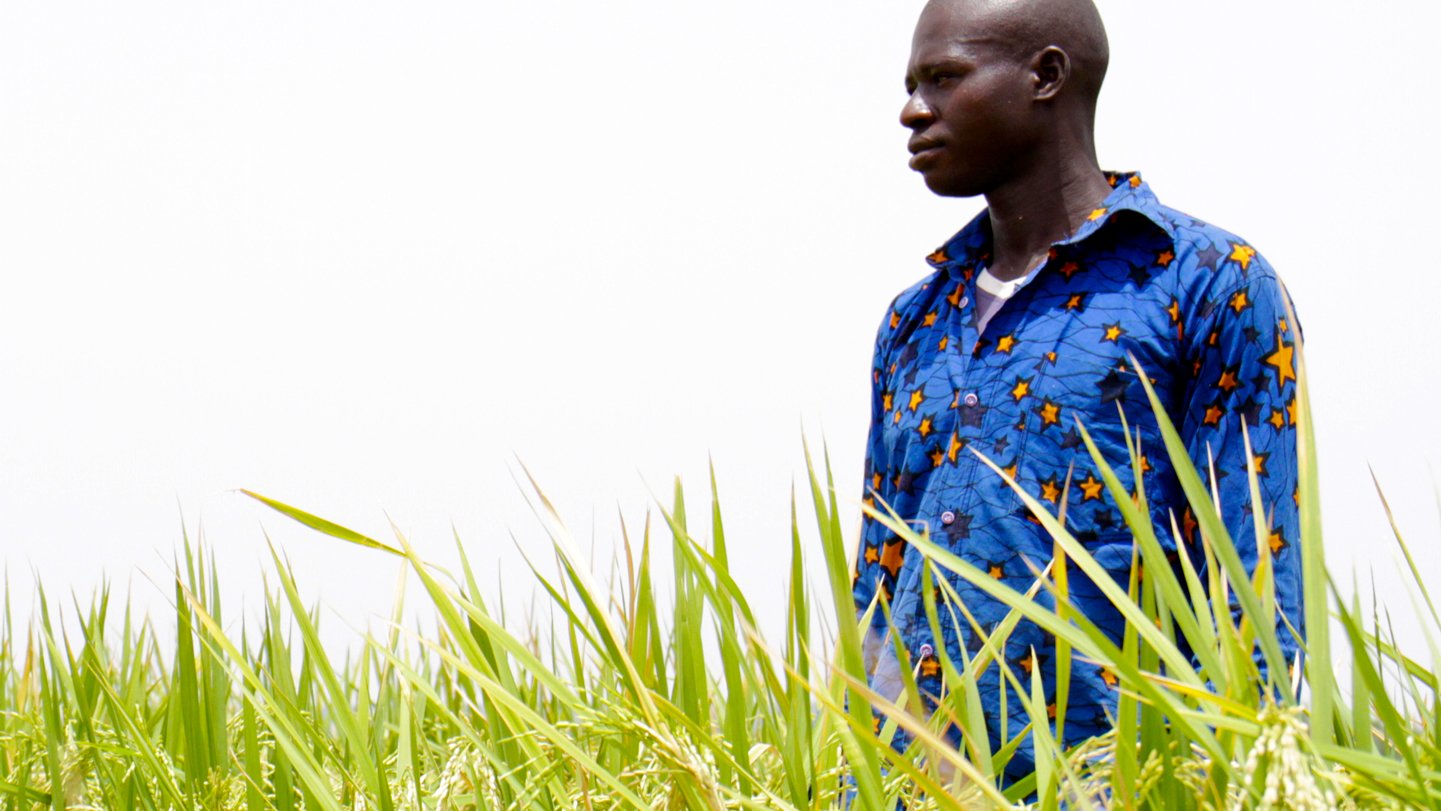 As the multiple actors involved in the seed sector in West Africa reinforce their collaboration and expand activities to the private sector, so are smallholder farmers starting to reap the fruits in terms of access to not only certified seeds, but also to seeds that can stand the changing climate.

Thirty one year old Ouattara Siriki is from Bama, a village located about 350 kilometers southwest of Burkina Faso’s capital, Ouagadougou. Like some of his peers, he did not have the opportunity to further his studies beyond primary education. As a result, he started helping out his dad in the family plot in his teens. In Bama, most of the population are involved in subsistence farming. This village of close to 5000 people has a tradition of cultivating rice, maize, millet, and rearing livestock.

For decades, Siriki and his dad used to obtain seeds from families and neighbors when the planting season is about to start. Similar to many farmers in their village, seeds are usually just passed on or sold informally at the start of each planting season. For the most part, the yield potential of these seeds is low. This is what is generally referred to by experts as the traditional or informal seed system. For many decades, this is how farmers in Burkina Faso and in many areas of West Africa have traded or distributed seeds.

“About 80 percent of the seeds planted by farmers in West Africa come from the informal system,” according to the West and Central African Council for Agricultural Research and Development (CORAF), the body responsible for reforming the seed industry in West Africa.

“This system does not only supply poor-quality seeds, but it also perpetuates the vicious cycle of low productivity,” says Bobo-Dioulasso-based, Abdoulaye Sawadogo, one of Burkina Faso’s most successful seed entrepreneurs credited for expanding the reach of certified seeds in his country and across West Africa.

“For a farmer to travel to locations where they can purchase quality certified seeds, they most often have to trade off a day or two of work, spend money on transportation and feeding,” says Mr. Sawadogo in reference to the challenge of access to quality seeds in West Africa.

“And sometimes, after making these efforts, they cannot afford as the prize of the certified seed is usually slightly higher for the average farmer,’ he says.

As private seed companies and cooperatives expand in Burkina Faso and learn to collaborate better with research institutions providing quality breeder seeds in an environment where seeds can move across borders relatively quicker, the chances are now getting better for farmers to come in close contact to quality seeds for purchase.

In Bama, not only has the Siriki family become users of quality seeds on their own family farm but they have also become a major outgrower for NAFOSO. Major seed companies in West Africa tend use the outgrower scheme in the multiplication of certified seeds. The increase in the yearly production of seeds by Siriki and his dad has made a big difference in the improvement of their livelihoods.

“I earn close to two million FCFA from producing seeds. The revenue helped me to construct my house, marry my wife, and support my family,” explains a delighted Siriki whom we met on a rice field in Bama, in the Haut Bassin region of Burkina Faso.

Siriki and his father produce and sell exclusively to NAFASO per their agreement. Like Siriki, there are hundreds of outgrowers working to produce quality seeds across Burkina Faso. The production from this network of outgrowers is what results in the yearly production of close to 6000 metric tons of seeds by NAFASO.

“With this approach, we are able to meet the demand of the domestic and regional market,” says the CEO of NAFASO, one of the largest seed companies in West Africa.

Though the supply-demand gap may still be large, NAFASO’s contribution to access to quality seeds in Burkina Faso as well as in other West African countries cannot be undermined.

In late May, when we visited his Headquarters in Bobo Dioulaso, he had just dispatched three trucks full of rice seeds to Sierra Leone and Senegal. Of the close to 6000 metric tons produced every year, NAFASO exports close to 2000 tons to Nigeria, Senegal, Sierra Leone, Chad, Congo, and other countries in West and Central Africa.

“Most of these new businesses would not have been possible without the intervention of CORAF designated by the Economic Community of West African States (ECOWAS), and the West Africa Economic and Monetary Union (WAEMU), and Permanent Interstate Committee for drought control in the Sahel (CILSS) to coordinate the harmonization of the regional seed regulation,” assets Mr. Sawadogo.

With the ECOWAS, WAEMU, and CILSS, CORAF continues to lead strategic efforts to strengthen seed coalitions in West Africa, which include building a coalition in the private sector known as the Alliance for Seed Industry in West Africa (ASIWA) and strengthening the coalition for the implementation of the regional seed regulation.

Though, it might be early to assess the real impact of CORAF’s contribution to access to quality seeds, the Burkina Faso experience shows that these efforts have altered the trajectory of seed production, marketing, and access by poor smallholder farmers.

Not only has the seed cooperative associations expanded their activities but they are undertaking more effective outreach activities as a result of the empowerment programs from CORAF, acting as the technical partner of ECOWAS and WAEMU.

At the peak of government support to the seed cooperative association of Burkina Faso through the West Africa Agriculture Productivity Program (WAAPP) in 2013, seed production rose to about 9,000 tons. This dropped to about 5,500 tons in 2018. WAAPP worked with another CORAF initiative, the West Africa Seed Program (WASP) to bring seed actors together to facilitate smallholder farmers access to quality seeds.

CORAF’s work in the past decade in Nigeria included support to the seed system through WASP and WAAPP.

“Thanks to CORAF’s efforts, 70,000 metric tons of foundation seeds were distributed to competent seed companies who in turn produced and sold certified seeds to farmers in Nigeria, Liberia, Sierra Leone, and Guinea during the Ebola crises of 2015,” says Prof, Onyibe, Technical Advisor to the Seed Entrepreneurs Association of Nigeria (SEEDAN).

CORAF though WAAPP Nigeria also supported the National Centre for Genetic Resources and Biotechnology through the funding of the National Variety Release Committee meetings, maintenance of the National Genebank and upgrading critical facilities of the Biotechnology laboratory for DNA fingerprinting of varieties and other genetic materials.

Despite the challenging climate, many farmers, as a result of acting as “breeders” have relied on seeds that are no longer adapted to the erratic rainfall patterns and the unpredictable weather conditions.

The improved collaboration among the public research institutions, seed businesses and farmers has helped to address concerns relating to the changing climatic situation and the nutritional value of the key staples, which are increasingly being factored into crop breeding programs.

“Most of our clients demand seeds that are resistant to diseases and pests and adapted to climate variability. Farmers want seeds of high-yielding crop varieties with high nutritional value,” says Stephen Yacouba Atar, CEO of one of Nigeria’s oldest seed company, Da-Allgreen Seeds Limited.

“Our ability to meet the demands of the farmers is because the research institutions are giving us quality parental materials that respond to the changing needs. Without CORAF, we wouldn’t have been able to afford quality breeder seeds of such varieties,” says the CEO of Da-Allgreen Seeds Limited, a Kano-based seed company.

Working Better Together for the Interests of Farmers

There are many actors involved in the seed sector in West Africa. At the regional level, they include the Regional Economic Communities and the Inter-Governmental Organizations notably the ECOWAS, WAEMU and CILLS. The  scientific and technical partners include IITA, AfricaRice, ICRISAT, IFDC, FARA, the National Agricultural Research Institutes, the Private Sector, AFSTA, ROPPA, HubRural, multinational companies, as well as the Financial and Technical partners such as the World Bank, the African Development Bank, and USAID.

A new initiative funded by the USAID is nurturing critical partnerships among the major players of the industry to deliver seeds and associated technologies to farmers in an accelerated fashion. The Partnership for Agricultural Research, Education and Development (PAIRED) has as a primary mission to seek innovative approaches to create synergy and and optimize resources to deliver the vital science and technology to farmers.

Actors believe that stronger partnership with greater involvement of the private sector is the best approach to deliver on the needed innovation to farmers in West Africa.

“Coordinating the efforts of these organizations is critical in delivering the expected development outcomes to the farmers,” explains Dr. Hippolyte Affognon, Manager of PAIRED.

“Dwindling development resources means we should seek efficient and effective approaches to deliver impact at scale. We believe that the PAIRED approach of optimizing efforts and resources will help in this regard,” adds the PAIRED Project Manager.