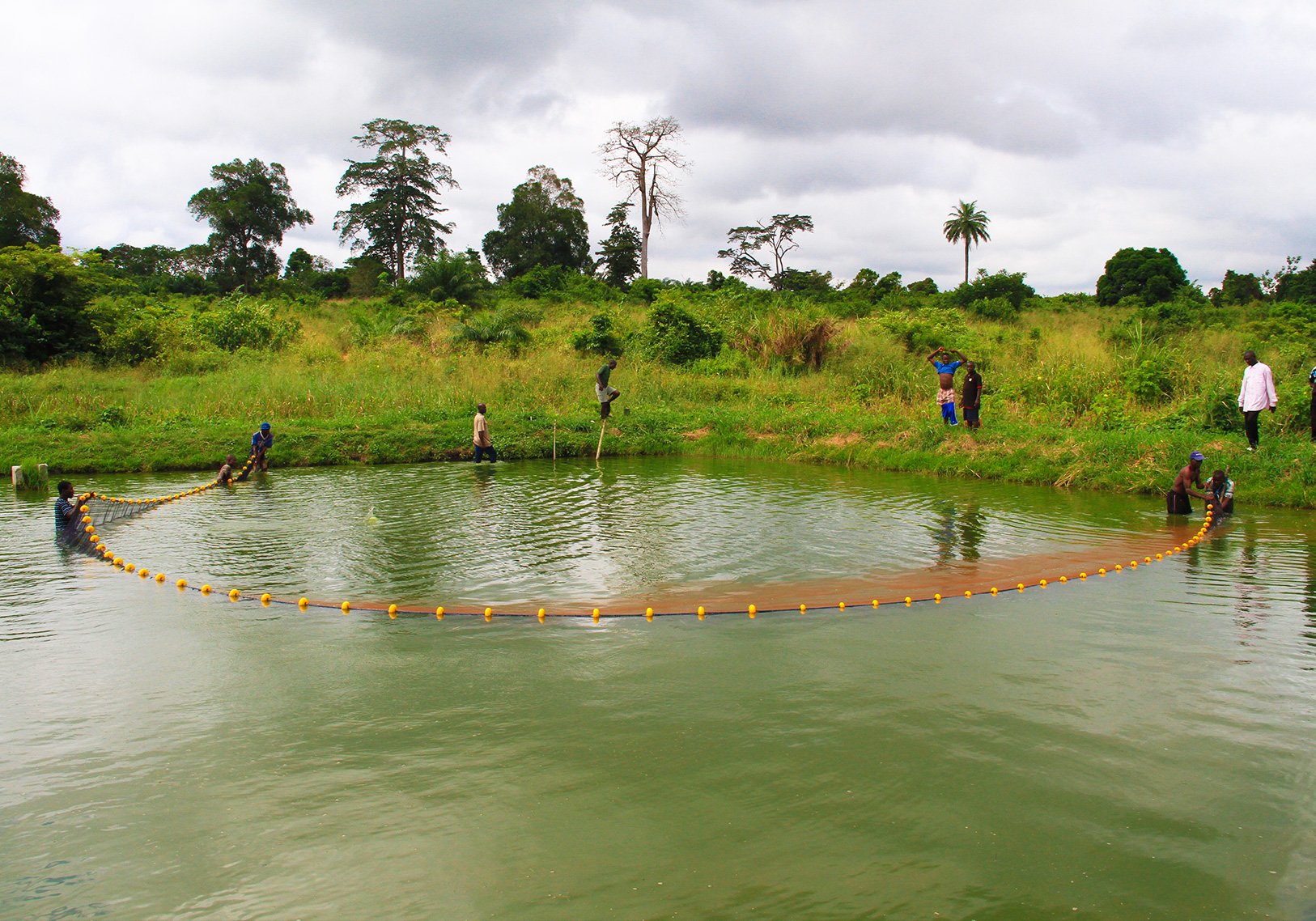 A three-year research and development project funded by the West Africa Economic and Monetary Union (WAEMU) and implemented by CORAF has contributed to the uptick in the incomes and livelihoods of fish farmers of the region.

Ivorian, Klodan Sanogo had a particularly challenging year. Sanogo spent considerable time, energy and money on his cocoa farm in the 2018 farming season with the hope to increase his yield and income. But fungal attacks on his cocoa farm resulted in a significant decline in production and an unexpected financial loss. But thanks to new fish farming practices, this 52-years-old farmer was able to cushion the loses suffered.

“Fish farming saved my life and that of my family,” he said with a big smile at his fish farm located in Bahompa in the Central West of Côte d’Ivoire. For this 52-years-old farmer, he considers himself as the commender of fishes “je suis le commandant du poisson.”

Since 2016, researchers have stepped up efforts to understand the genetic composition of sheep, cattle, guinea fowl, and tilapia in five West African countries with the primary goal of further boosting their production. Specifically, the researchers have been at the forefront of not only developing quality fish feed and fingerlings, but they have also been building the knowledge the farmers on best practices in fish farming.

Fish farmers in this center-west town of Bahompa in Cote d’Ivoire and other actors of the value chain have since 2016 come together under an arrangement which allows them to learn new practices from researchers as well as exchange on their challenges and collectively seek solutions.  This problem-solving approach, also known as innovation platforms have been central to the uptake of research results in Côte d’Ivoire.

“Since I received new feed and fingerlings, my production has increased substantially,” says the 52-years-old Sanogo.

When we met Sanago at his fish farm in late October 2018, his excitement was visible. The additional revenue generated from fish farming had brought the needed financial stability to the point where he was now looking to purchase a new car to improve his living standards.

“I will order a brand new 4-wheel drive car this year,” he said with a lot of assurances. To him, the decision to buy a new car is not only based on improving his style of living but to also facilitate his operations such as transporting inputs to his farm and the harvest to the market.

Funded at roughly 500 million FCFA (USD 1 million), the research conducted under this WAEMU project is expected to provide sustainable solutions which do not only improve yields, contribute to the nutrition and food security of people, but to also improve livelihoods and lift people out of the vicious cycle of poverty.

Already, the results are having a lasting impact and helping bring relief to Sanogo and his household: “I was losing weight when prices of cocoa started falling. As you can see now, I am regaining weight.”

“I Sent my Kid to Canada with Proceeds from Fish,”

The center-west of Côte d’Ivoire is considered the second highest production region of the country after Daloa. Other major pisciculture areas include Abidjan and Abengourou.

One of the outstanding farmers who has benefitted most since changing fish farming practices is Diallo Issa. For decades, Issa relied on proceeds from cocoa for his livelihoods. But with fallen production and dwindling profits, Diallo started to focus more on pisciculture.

For this dad with eight kids, he is so proud to inform us that thanks to the sales of fish, he was able to send one of his sons to Canada recently.

“I sold cocoa and used the proceeds to pay for the fees of my three kids in college at 150.000 FCFA (USD300) each. The rest of the money was used to send my son to Canada,”

“I want to expand my fish ponds,”

Fifty-years-old Zanga Diarrasouba is Senofu, a tribe mostly from the North of Côte d’Ivoire. He migrated south in 1988 to work in cocoa plantations. Recently he was cultivating about five hectares of cocoa.

“I did not gain anything substantially from my cultivation in 2018,” he says.

But with new knowledge and inputs on fish farming, Diarrasouba produced about 1.5 tons of fish in 2018 and is looking to expand because of the profitability of the sector.

“I want to expand my fish ponds,” said Diarrasouba.

For three years, actors of CORAF, CIRDES, and others involved in this project have been pushing toward making fish farming a profitable business.

Quality fish feed, the availability of fingerlings, land and a rolling fund are some of the significant inputs to successful fish farming, argue experts.

But as we noticed throughout our trip to Cote d’Ivoire, many are held back by lack of availability of feed and fingerlings.

“I want to expand my fish ponds. My biggest challenge now is getting fish feeds,” says fifty-years-old Zanga Diarrasouba.

“Without water and inputs such as fish feeds, it becomes challenging to expand,” said the optimistic Issa.

Of the 240 fish farmers in the region, most would like to see quality feeds to grow their business.

“This could potentially be part of the second part of the project. Part of what we plan to do in future is to explore ways of having some of the farmers here take on the production of feeds,” said Dr. Cyrille Kouassi, the project coordinator in Cote d’Ivoire.