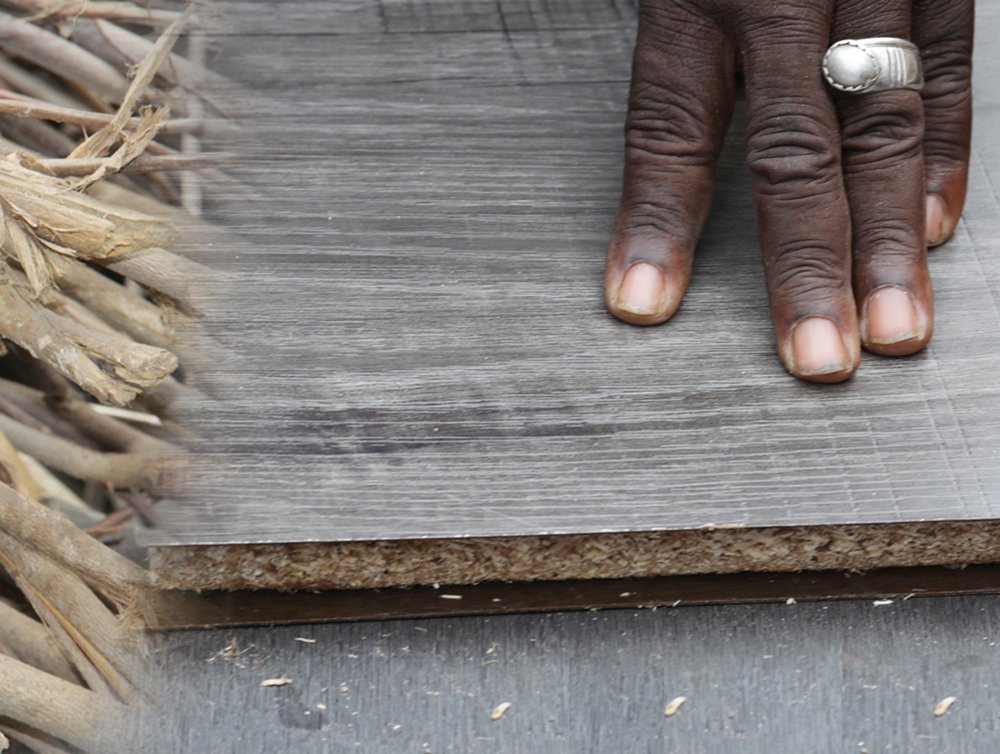 In almost all cotton-producing countries in West Africa, cotton stems are viewed more like a good-for-nothing residue. For the most part, they are burnt off after harvest. A small portion is used for organic fertilization, livestock feed, and firewood for rural households.

But this reality may soon change in West Africa. A useful technology meant to add value and transform the close to 1.6 million tons of post-harvest cotton stems produced in Benin, Mali, and Togo has been introduced to experts in the region.

The first of a series of new technologies acquired from India under a project initiated by the West African Economic and Monetary Union and managed by CORAF were recently installed in the cotton-growing city of Parakou in Benin. Planned to operate initially as a pilot, the Parakou unit will be used to transform some of the cotton stalks to particle boards thus increasing and strengthening the revenues of smallholder farmers.

Particle boards are a reliable substitute for plywood and can be used as floor and ceiling tiles, furniture items, wall panels. Not only do they fit well with school buildings, hotels, commercial and residential houses, but experts argue that they are also environmental-friendly in the sense that they reduce pollution resulting from burning the stems and limits pressure on cutting forest for furniture making.

Experts from Benin, Mali, and Togo trained during the installation of the Parakou unit are expected to set up similar production units in their respective countries.

The long-term goal is to improve the livelihoods of those living in rural communities by raising incomes, creating jobs, and boosting lasting economic growth.

“Our hope is to install, test, and communicate the benefits of these units to the people of Mali as they have immense potential to reduce the income disparities,” said Dr. Amadou Ali YATTARA, a cotton expert from Mali.

The massive uptake of this technology will be central to upscale the impact of this innovation across cotton-growing communities in West Africa.

In keeping with CORAF’s technology diffusion approach, relevant knowledge about this transformation units shall be shared on innovation platforms.

“I think this is a good initiative that will not only help reduce poverty and increase the revenue of the concerned populations but can also be expanded to all of Benin,” Mr. Emile ADIMOU, President of Benin’s innovation platforms explained.

“There are undoubtedly benefits to women and youth, but I am concerned that some of the machines might end up in warehouses or abandoned to rust.”

For communities with relatively low incomes, acquiring and using these machines may pose a substantial difficulty. As with other technologies in the region, without the involvement of private businesses with better investment abilities, take-off may prove challenging.

“We hope to see cotton businesses invest in this activity. Why not install the transformation units around cotton firms to increase the revenues of producers in cotton-producing communities,” asked Dr. YATTARA from Mali.

In the cotton stalks lie tremendous income-generating possibilities and poverty reduction options for the close to 10 million producers in rural communities involved in the sector in Mali, Cote d’Ivoire, Benin, Togo, and other leading producing countries in West Africa, experts say.

With the relevant technology, rather than dispose of cotton plant stalks, they can also be transformed in profitable particle boards.

“This is an opportunity for us to prove that there is value addition for cotton stems. That we can draw much from this residue to increase incomes and create materials for our construction,” says Togolese researcher, Gnofame NAMBOU.

No single West African country can compare with China, the United States, and India in matters of cotton production and export. But collectively, West Africa is now the world’s third largest exporter of cotton representing a considerable percentage in international cotton trade.

In sub-Saharan Africa, production is mostly concentrated in the tropical zone and mostly rainfed, according to the Organization for Economic Co-operation and Development (OECD).

The West African basin stretching from Senegambia to Southeastern Chad and even to the heart of the Central African Republic represent the largest production area in Africa, according to OECD. Eight of the 12 leading African cotton-producing countries are found in West Africa.