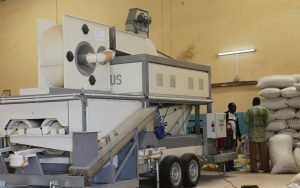 It emerged from the visit that, Africa largest sub-regional research organization, the West, and Central Africa Council for Agriculture (CORAF) Research and Development will coordinate efforts towards establishing the official partnership. CCORAF has been mandated by regional economic communities including key actors in the food chain in West and Central Africa to coordinate research efforts and help scale up solutions that can result in the transformation of the agriculture sector in the region.