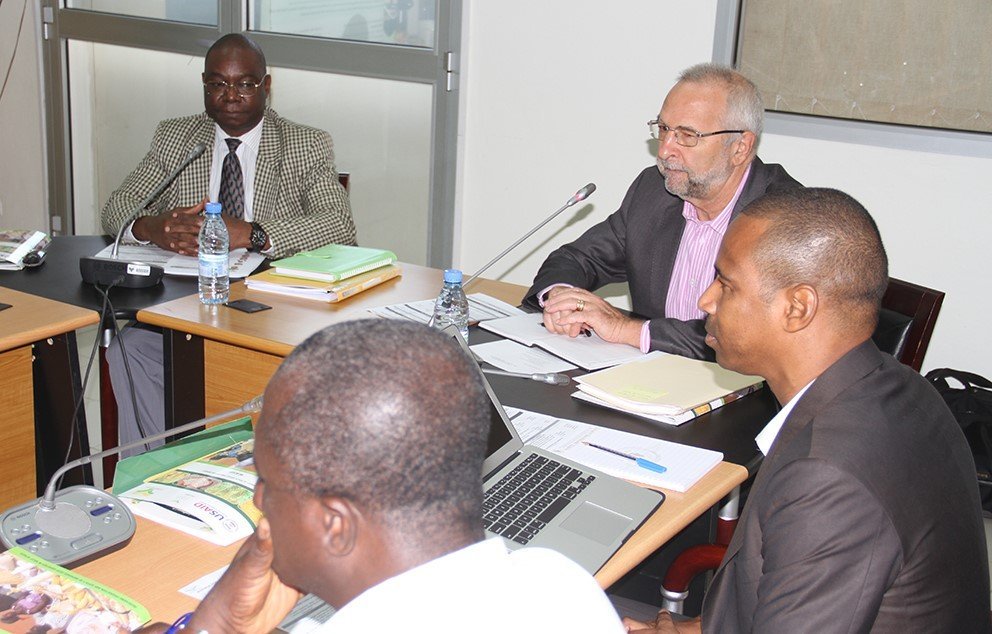 For the past 10 years, the United States Agency for International Development/West Africa (USAID/WA) and the West and Central African Council for Agricultural Research and Development (CORAF/WECARD) have had a vibrant collaboration to support quality seed access to farmers and  upscale improved agricultural technologies and innovations . This was the main point of discussion during the visit of Mr. Alexandre DEPREZ, the Mission Director of the USAID-West Africa to CORAF/WECARD Executive Secretariat, on September 7, 2016 in Dakar, Senegal.

During his visit, Alexandre DEPREZ, reiterated the support of his institution to CORAF/WECARD. “I am here to express the support of the American People to the West African people and I will seize this opportunity to explore to what extent we can strengthen cooperation between our two institutions for food security in West Africa. ” said the Mission Director.

Dr Abdou TENKOUANO, the Executive Director of CORAF/WECARD, presented an overview of the achievements of his institution. “In the 30 years of its existence, CORAF/WECARD has connected talents and coalesced isolated efforts into purposeful partnerships to deliver science innovations that drive agricultural development and economic growth in West and Central Africa” he pointed out. He also indicated that CORAF/WECARD is  refreshing its  strategy and vision. As part of upcoming operational plan, CORAF/WECARD will be focusing on strengthening Regional Capacity and Excellence, delivering Impact at Scale as well as Foresight and Anticipation to guide public decision-making processes in particular for agricultural science and technology priority setting.

Besides the exchange with the USAID Mission Director, a technical work session took place, at which USAID/WA was represented by a delegation of composed of Mrs Catherine HAMLIN (Lead Agriculture Team) and Mr Abdrouhamane DICKO (Program and Policy Officer) and CORAF/WECARD by Dr Youssouf CAMARA (acting Director of Research and Innovation), Dr Ernest ASIEDU (Chief of Party, West Africa Seed Program), Mrs Safouratou ADARIPARE (Director of Finance and Administration) and Dr Anatole KONE (Manager, Information and Communication). The two delegations agreed on specific institutional and technical activities to be planned and implemented in due course.

USAID has been supporting CORAF/WECARD since 2006 to achieve its mandate to develop and ensure effective implementation of sub-regional research for development in the region through the coordination and prioritization of research.

First, the assistance helped to strengthen the institutional capacity of CORAF/WECARD as an organization through the Institutional Support and Food Security Program (IFSP), implemented within the Global Food Security Response Initiative (GFSRI) and implementation of six projects covering staple food crops, and agricultural crop-based biotechnology to strengthen the institutional and human capacity of National Agricultural Research Systems (NARS) in 11 countries.

From 2011, the USAID support was oriented towards the Feed the Future (FtF) initiative and to the priorities of ECOWAP/RAIP focusing on creating sustainable improvements in agriculture. In this framework, CORAF/WECARD was entrusted with the coordination of the West Africa Seed Program (WASP) in 2012. CORAF/WECARD has facilitated over the past four years, the intraregional trade through the development of a favorable policy environment for the effective implementation of the ECOWAS-UEMOA-CILSS Harmonized Seed Regulation within the 17 countries which has doubled between 2013 and 2016.

Leveraging on the Regional Harmonized Seed Regulation, CORAF/WECARD has fast-tracked the recovery in Liberia, Sierra Leone and Guinea for the Post-Ebola Agricultural Rehabilitation Programs and helped to prevent the looming specter of hunger for one million rural families through the multiplication of foundation seed supplied as certified seeds.