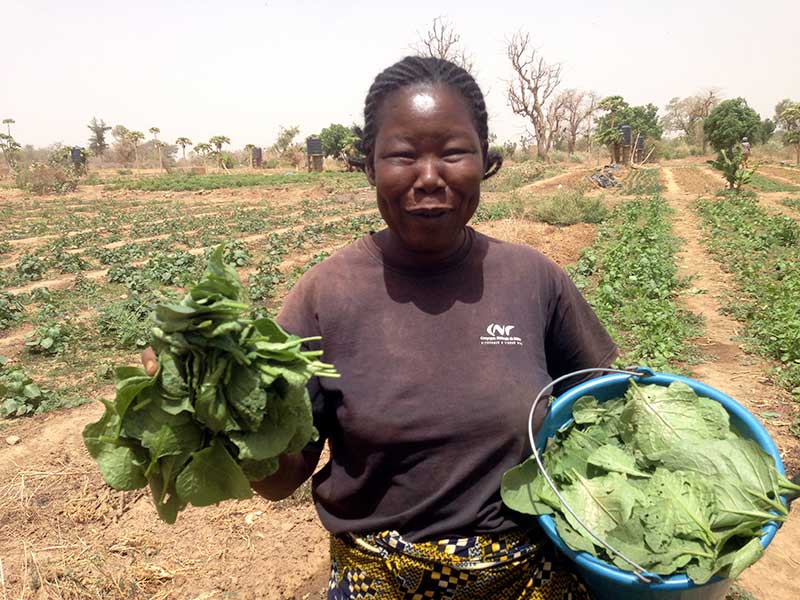 5,000 Smallholder Farmers from Cameroun, Burkina Faso and Ghana are returning to their roots through the integration of traditional vegetables to their daily diet as a sustainable way to improve their nutritional health while increasing their income. These significant results are achieved through the ‘Enhancing Productivity, Competitiveness and Marketing of Traditional African (Leafy) Vegetables for Improved Income and Nutrition in West and Central Africa” project funded by CORAF/WECARD.

After three years of implementation, the project coordinated by the World Vegetable Center-Africa is ending on positive note with over 30,000 Smallholder farming family members saved from malnutrition especially women and children. “The project has boosted vegetable production for higher productivity and open up opportunities to increase household income and improve their nutritional status” stressed Regine KAMGA, Regional Project coordinator at WorldVeg.

In fact, childhood malnutrition is critical in most of the West and Central African countries and much of the micronutrient malnutrition can be attributed to the lack of local diets’ diversity such as traditional leafy vegetables. However Traditional African vegetables are neglected and underutilized although they offer comparative advantage over their exotic counterparts, including high nutritional value, superior adaptation to local environmental conditions.

So far, the project has identified and promoted 10 high nutritious traditional vegetable crops, developed postharvest handling methods including cleaning and storage, as well as food processing methods such as solar‐powered dryers, have been adapted to help preserve the food produced in this project and allow nutritious food to be available throughout the year. “Therefore, farmers gain a better understanding of the value of increased returns on production through enhancement of marketing of surplus vegetables” explains Dr Ousmane Ndoye, Crops program Manager at CORAF/WECARD.

In Burkina Faso, the project successfully engaged pastoral nomads in home gardening, which increased vegetable consumption in this community. In southern Cameroon, increased supply of vegetables in local markets has been observed and this apparently resulted from a shift from sole collection of forest products to cultivation of vegetables promoted under the project. In northern Ghana, women are increasingly taking advantage of premium prices accrued for dry season production of traditional vegetables, which had hitherto been essentially confined to mixed cultivation with food crops during the rainy season.

“Before the implementation of the project, I was cultivating small scale onions, tomatoes and eggplant on a half hectare. But I was producing only 4 months during the year and only the third of the production is used for food, while the rest was sold at low prices. Therefore, my children were facing stunted growth in terms of weight and frequently fall ill. But with the project we learned to valorize traditional leaves that grew behind our huts and which we have neglected. Today my family eat better and is no more malnourished because we produce all year round and our daily food intake contains more nutrients-rich vegetables” testifies Germaine SORE, a beneficiary market gardener from the Eastern Region of Burkina.

“I was a former cabbage farmer but the business was not profitable at all because of pest damages. But since I joined the project on traditional African vegetables, I make 60% more profit and the project also provided me with market opportunities. Now I supply 3 secondary and technical schools in my community with vegetables to feed their residents students. The demand is so high that I have decided to start the training for the production of high‐quality seed of high‐yielding and nutrient‐dense cultivars namely Amaranth and Roselle in order to sustain the vegetable production demand from consumers and producers” added Umar Mohammed Abdourhamane from Tamale region in Ghana.

During the end of project workshop held in Burkina Faso from 27-28 July,2016, the Executive Director of CORAF/WECARD invite the project coordinators to leverage on the community anchorage of the project for effective and inclusive growth of rural communities. “For the up-scaling of the key project achievements, it is important to develop a crucible of community experiments that will serve as farmer education centers where new varieties, crop management, practices and water delivery systems are tested and showcased through participative training and awareness campaigns” said Dr Abdou TENKOUANO before adding that this project must foster community resilience by enabling them to increase market‐focused production.