Home News ECOBANK / SDG: CORAF / WECARD at the heart of initiatives for “Zero Hunger” in West and Central Africa 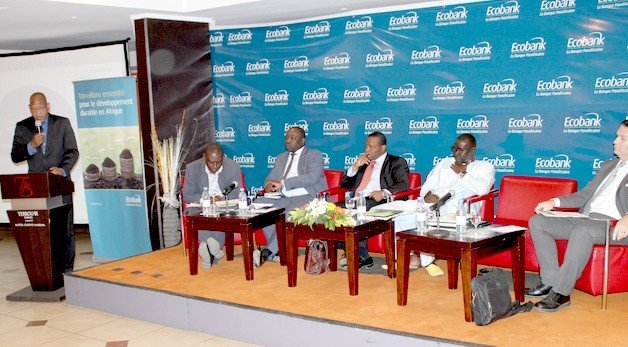 The West and Central African Centre for Agricultural Research and Development (CORAF/WECARD) participated on December 3rd to a panel discussion on the impact of international organizations in achieving the Sustainable Development Goals (SDGs) on the invitation of the ECOBANK Group in Dakar, Senegal.

During this panel, Paco SEREME, Executive Director of CORAF / WECARD after recalling the partnership between the ECOBANK Group that began since 2003, made a presentation on the contribution of the institution to achieve the objective “Zero Hunger” in West and Central Africa.Through an integrated research system, CORAF / WECARD has generated positive impact on improving nutrition and the fight against food insecurity in the sub-region.

The Executive Director of CORAF/WECARD also took the opportunity to advocate for a resource mobilization in favor of the agricultural research.”On one hand policy makers must respect their commitments on budget dedicated to agriculture and financial institutions should also facilitate loans agricultural activities” said Paco SEREME.

“This is for ECOBANK to demonstrate its commitment to social, economic and environmental issues. It is important for us (ECOBANK) to involve all our partners namely financial and development institutions, associations and international NGOs in order to share initiatives that promote sustainable socio-economic development of the continent and the wellbeing of the population”said Mr. Serge ACKRE, CEO ECOBANK- Senegal.

This initiative of the pan-African bank, ECOBANK is part of its social responsibility policy.

During the Summit on Sustainable Development held on  September, 25, 2015, Member States of the United Nations adopted a new sustainable development program, which includes a set of 17 global goals to end poverty, fight against inequality and injustice, and to tackle climate change by 2030.