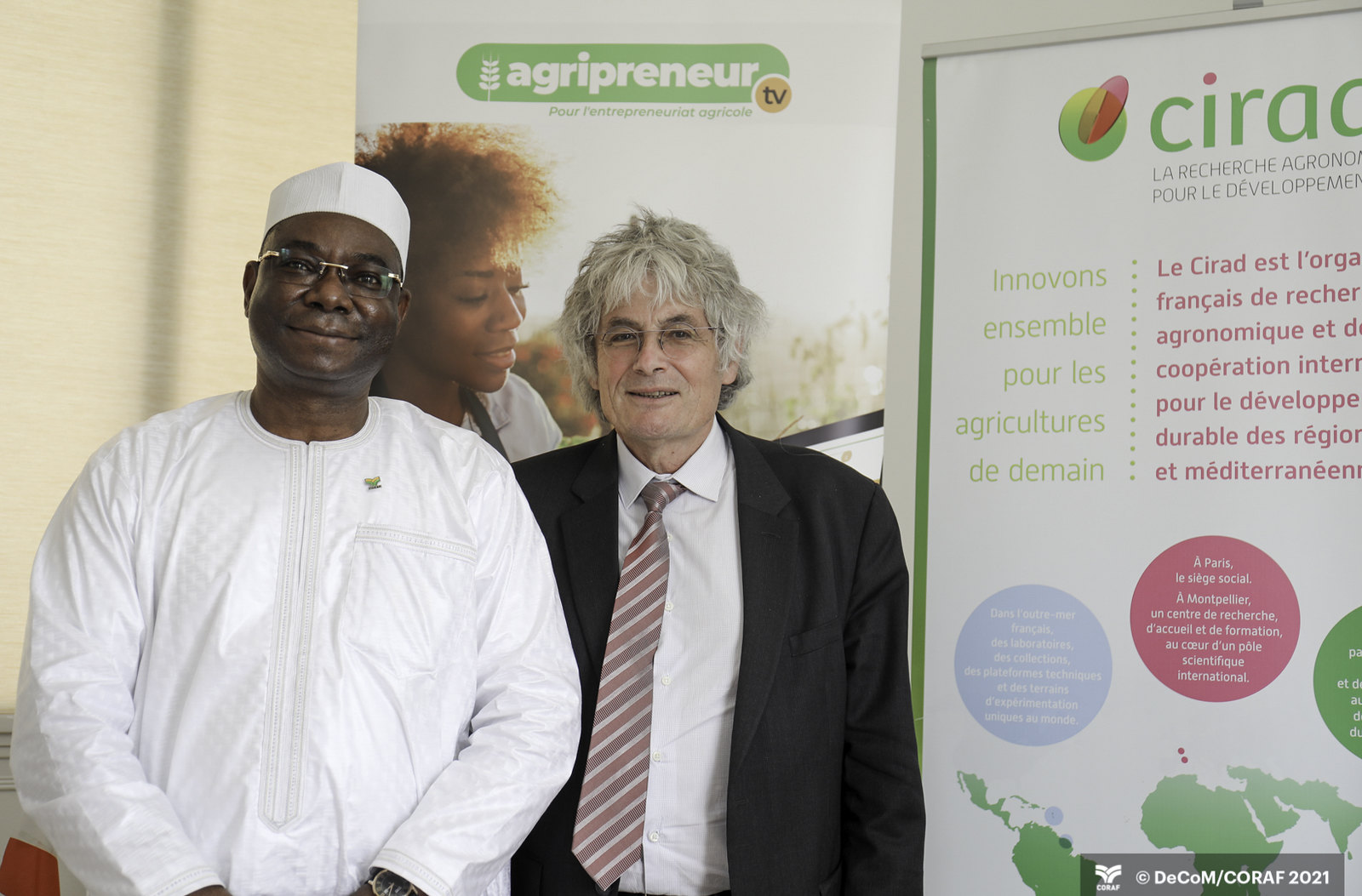 The Executive Director of CORAF and the President Director General of the French Agricultural Research Centre for International Development (CIRAD), met on Friday, April 16, 2021 to review their collaboration in support of agricultural research and development in West and Central Africa.

CIRAD is one of the world’s foremost agricultural research organizations. It works with partners in developing countries to spur innovations in favor of smallholder farmers. Both organizations have a longstanding working relationship in the Sahel and across West Africa. With CORAF expanding activities into Central Africa, both leaders examined possibility of teaming together to advance food system research in this critical agroecological zone.

At a recent meeting between the leaders of both organizations held at the CIRAD regional office in Dakar, Senegal, the Executive Director of CORAF expressed appreciation for CIRAD’s willingness to bring its vast experience and expertise towards implementing CORAF’s strategic plan for West and Central Africa.

CORAF holds its 13th General Assembly in  two-parts to refresh its strategy, including the adoption of a 2022-2027 Operational Plan that would deepen CORAF’s support to members in Central Africa.

CORAF’s Executive Director acknowledged it would be critical to draw on each other’s expertise in strengthening the existing centers of specialization and expanding CORAF’s portfolio in Central Africa.

“We can assure you of CORAF’s invitation to work on the centers of specialization. We also count on CIRAD as we develop programs targeting Central Africa,” said Dr. Tenkouano.

Friday’s meeting allowed both leaders to explore the state of implementation of their current agreement while setting their sights on a new one.

The last collaborative agreement between CORAF and CIRAD was signed in December 2017. With the memorandum of understanding having expired in 2020, both leaders agreed to work towards a new iteration after the 13th Ordinary Session of the General Assembly of CORAF to cover the period 2022-2025.

“CORAF is a Vital Partner,”

Speaking during the meeting, the President Managing Director of CIRAD, Dr. Michel Eddi, acknowledged CORAF’s leading role in the research and development landscape in West and Central Africa.

“CORAF is an essential partner of CIRAD and has a vital role in the research and development landscape in West and Central Africa,” said Dr. Michel Eddi.

The CIRAD boss was recently visiting the Sahel operations or his organization. During meetings in Burkina Faso, Mali, and Senegal, he met with both CIRAD partners and researchers.

“I intended to meet with CIRAD historic partners before departing the organization and CORAF is one such partner,” Dr. Eddi told his CORAF counterpart.

The CORAF Executive Director used the occasion to thank CIRAD for their partnership which is poised to continue to grow as we develop programs tailored to the needs of the people of West and Central Africa.

“We have developed a strong relationship over the years and build collaborative research models that are today used as best practices,” said the Executive Director of CORAF.

The Centre for the Improvement of the Adaptation to Drought (CERAAS) is an example of a tool both organizations have worked to advance in decades. CERAAS is the host of West Africa’s pioneer regional center of excellence on Dry Cereals.