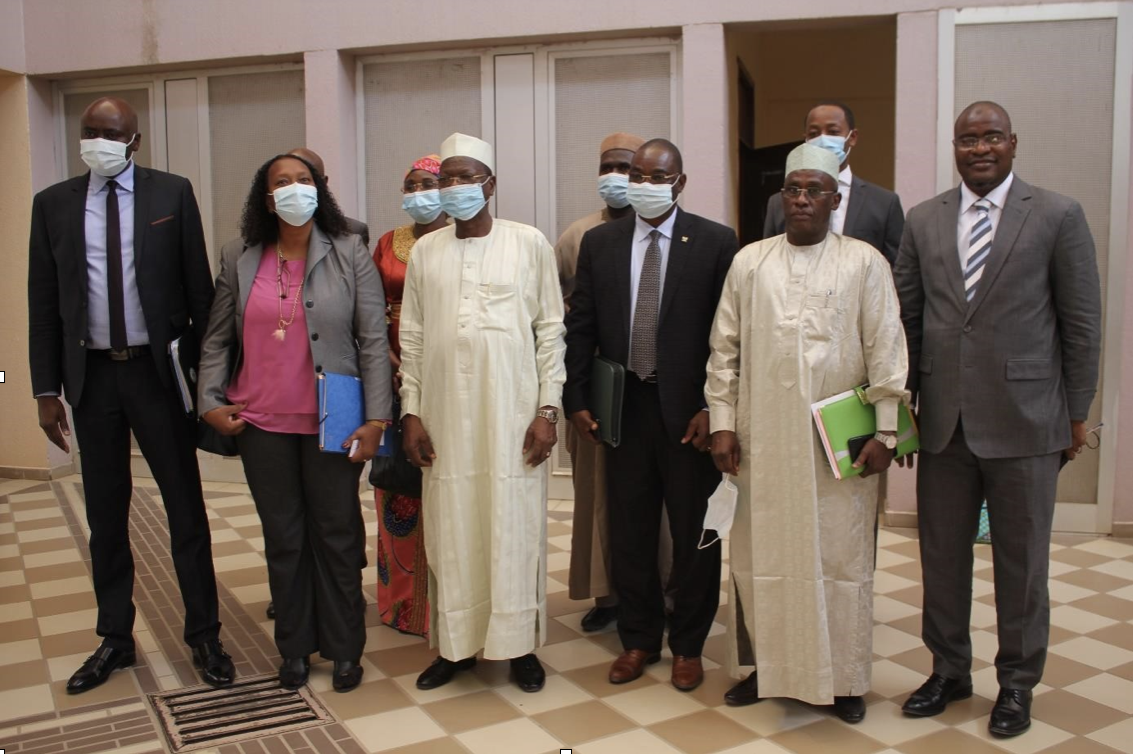 A joint delegation from CORAF and the Economic Community of Central African States (ECCAS) was recently received by the Minister of State and Secretary-General at the Presidency of Chad. Led by the Chairperson of the Governing Board of CORAF, Dr. Angela Moreno, the delegation was in Ndjamena to discuss the upcoming 13th General Assembly of CORAF.

The General Assembly is CORAF’s highest decision-making body and holds after every three years. The last one was held in Dakar in April 2018.

COVID-19-related travel restrictions have meant CORAF has split the holding of its 13th General Assembly into two parts. The first part holds virtually at the end of April 2021. The physical part of the 13th General Assembly of CORAF is planned to hold in the Chadian capital in January 2022.

During the audience granted to the joint delegation, the Minister of State and Secretary-General at the Presidency of Chad, His Excellency Kalzeube Payimi Deubet, reiterated Chad’s support in the organization of the 13th General Assembly.

Central to the CORAF/ECCAS delegation mission was obtaining the Government of Chad’s support towards the holding of the General Assembly. Such events are usually opportunities to highlight research outcomes through a Scientific exhibition and approving governance and strategic plans of CORAF.

Minister Deubet used the occasion to reiterate his government’s readiness to support the event’s holding, particularly in view of the relevance of research to agricultural development. Chad’s agriculture faces many challenges, including the adverse effects of climate change. Minister Deubet sees research helping to identify solutions to the climate effects on the country’s agricultural sector.

CORAF already supports the Chadian government in a technology dissemination project of proven climate-sensitive technologies in some areas of the country under the Climate Resilience Agriculture and Productivity Enhancement Project (ProPAD). A new project started in 2021 and funded by the Swiss Development Cooperation is also expected to benefit farmers and producers in Chad.

Minister Deubet welcomed the close involvement of ECCAS in the organization of the 13th General Assembly.

Before meeting at the Presidency, the joint delegation was received by Abdoulaye Diar, Chad’s Minister of Agriculture. Both parties reviewed CORAF’s support for Chad since 2012 and the agenda of the upcoming General Assembly.

Lake Chad is a considerable source of water for the agriculture and livestock sectors in Chad. Evidence shows that the Lake has shrunk considerably in the past four decades, partly due to climate change. At the meeting, both parties discussed water management issues, climate-smart agri input varieties, and technology transfer.

Since 2012, CORAF has supported Chad through a series of projects focused on milk production, livestock breeding, capacity development, and maize production.

The question is no longer whether there are available technologies. Instead, it is how to scale them up to benefit end-users. During a meeting at the Chadian Institute of Agricultural Research for Development (ITRAD), the joint delegation discussed ways in which to rapidly scaling up proven technologies and step work on foresight and anticipation. The meeting also allowed its Director-General, Yacine Doudoua, to present ITRAD and its governance structure. ITRAD is CORAF’s foremost partner in Chad. Its Director-General serves on the Governing Board of CORAF and occupies the position of Vice-Chair.

The Regional Pole of Agricultural Research Applied to the Development of Agricultural Systems in Central Africa (PRASAC) is an instrument of the Economic and Monetary Community of Central Africa and a tool for scientific cooperation of CORAF. During the joint visit, the delegation met with its Director-General, Dr. Grégoire Bani, and PRASAC’s personnel. The opportunity allowed both parties to discuss how to strengthen scientific cooperation in the region and organize the 13th General Assembly of CORAF. PRASAC is an instrument that works to make the regionalization of research a reality in Central Africa.

The CORAF delegation included the Executive Director of CORAF, a representative of the Economic Community of West African States, and the Director of Corporate Services of CORAF. Mr. Abakar Mohammed, Head of Agriculture at the Rural Development Department, represented ECCAS. CORAF and ECCAS have an existing collaborative agreement designating CORAF as the technical partner of ECCAS on agriculture issues.