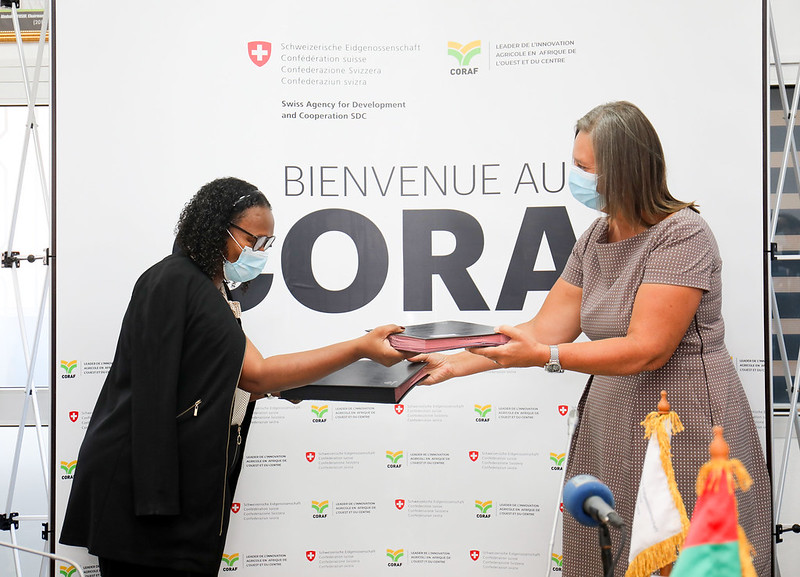 Roughly ten million people in West and Central Africa are expected to benefit from a new technology-scaling program funded by the Swiss Cooperation. The program to be implemented by CORAF targets explicitly women and youths in five West and Central African countries (Benin, Burkina Faso, Mali, Niger, and Chad).

An agreement to that effect was signed on Monday, November 30, 2020, at the CORAF Headquarters in Dakar, Senegal, between the Swiss Ambassador to Dakar, Her Excellency Dr. Marion Weichelt Krupski, and the Chairperson of the CORAF Governing Board, Dr. Angela Moreno. Ambassadors from some of the beneficiary countries were in attendance, including some financial and technical partners of CORAF.

“In concrete terms, this contribution aims at the food, the nutritional and economic security of more than 10 million people (direct and indirect beneficiaries), 50 percent of whom are women and 60 percent young people in West Africa,” according to the Swiss Diplomat.

The SDC funding to CORAF is primarily aimed at funding the 2018-2027 Strategic Plan of CORAF.

“It is not every day that donors approach a development organization without a predefined program. The agreement we are signing today reflects a demand-driven partnership approach for which the Swiss cooperation deserves special praise,” said the Chairperson of the Governing Board of CORAF.

“Throughout the process of engagement and design of this program, the Swiss cooperation has always sought to prioritize the CORAF strategic plan.”

From the Laboratories to the Fields

CORAF and its partners have generated many cutting-edge technologies and innovations in the past ten years. Overall, about 400 technologies have been generated. Many of them are not only youth and gender-sensitive but also climate-tolerant. The challenge is always how to ensure uptake of the technologies by the target users. Scaling these innovations is the central thrust of the new intervention funded by the SDC.

“The signing of this contract will allow research results to be taken out of laboratories and research centers and brought to the field and into agricultural businesses,” said the Swiss Official during the signing ceremony.

“Thanks to this agreement, the technologies developed will be scaled up and made accessible to small farmers, enabling them to be updated and develop new technologies that will meet their needs,” said Dr Abdou Tenkouano, Executive Director of CORAF.