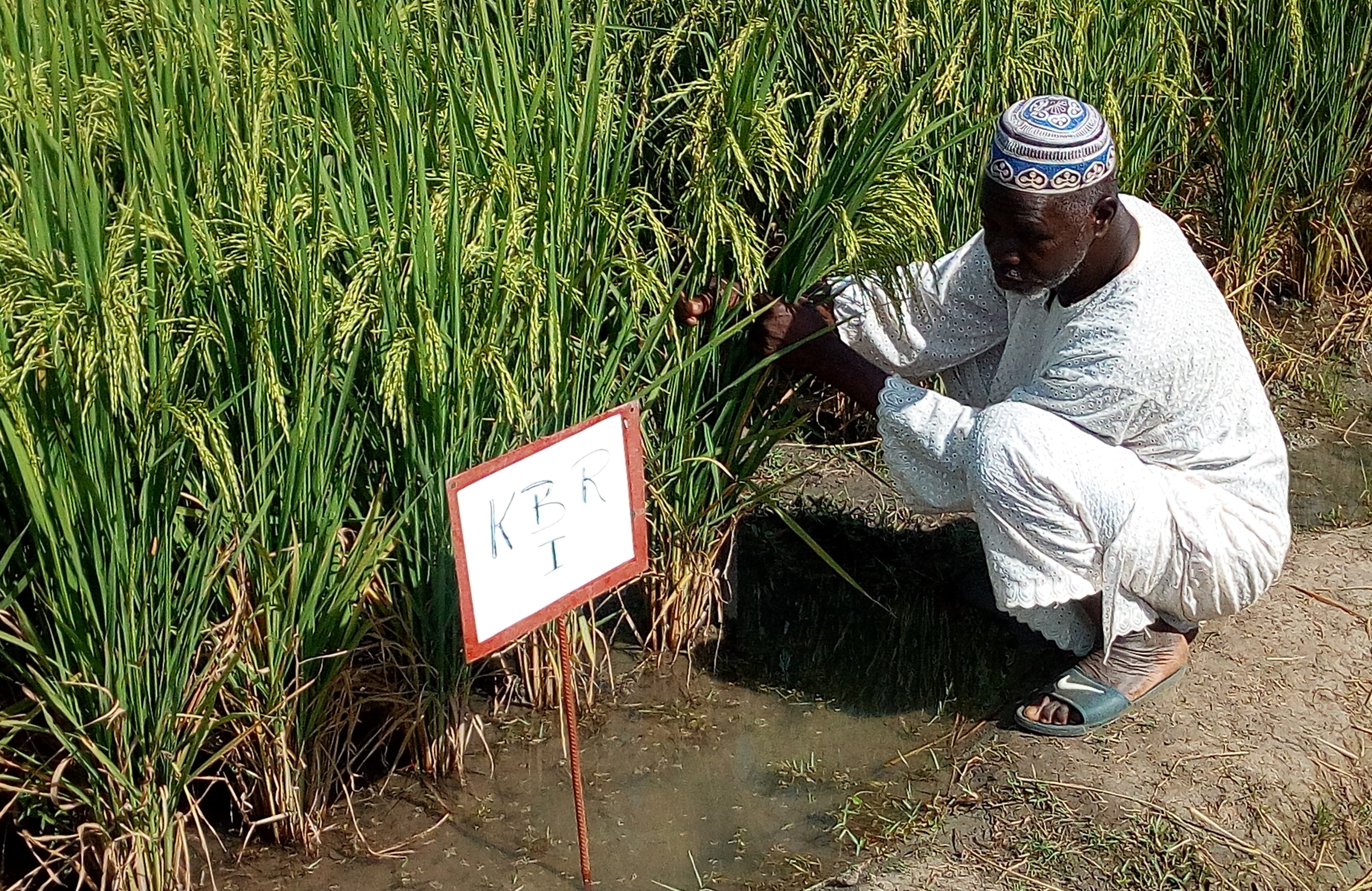 Rice is one of the primary staple food in the Sahel and across West Africa. Its sustainable production and transformation are crucial to the food and nutrition security of the region.

Burkina Faso, a landlocked country with a population of about 20 million people depend primarily on rice and other staples such as maize, millet, sorghum, and wheat.

While overall rice production in West Africa increased in the past decade, it is not close to the regional target of rice self-sufficiency. What this means is that many countries resort to importing rice to meet local demand. This is true in Burkina Faso as in other West African countries.

Through the System for Rice Intensification, CORAF and its national partners made a significant contribution to the regional ambition of producing enough rice for the region; efforts are still falling short in some countries.

Researchers of the National Institute for the Environment and Agricultural Research (INERA), the leading agricultural research institute in Burkina Faso, are working hard to devise new varieties that are not only high yielding but also more profitable and nutritive. This is the case of Dr. Valentin Edgard Traore, a Rice Breeder at INERA. In the following interview, he speaks about the latest research findings and how that could contribute to reducing rice imports in Burkina Faso. Read on…

Why did you think of creating new rice varieties despite the existence of unadopted varieties in Burkina Faso and across West Africa?

Dr Traoré: My ambition for creating and improving rice varieties started long ago. In 2009, I had had the opportunity to do my Ph.D. at the West African Center for Crop Improvement (WACCI) funded by the Alliance for a Green Revolution in Africa (AGRA). It was both a challenge and a great opportunity for me. With my background as a pathologist, I was convinced that gaining additional knowledge in genetics and plant breeding could help me develop new high-yielding rice varieties, resistant and tolerant to diseases and preferred by farmers and consumers.

In fact, between 1996 and 2005, I carried out a lot of varietal screenings for resistance and tolerance to Rice Yellow Mottle Virus (RYMV) disease. RYMV is the most-feared rice viral disease in Africa, responsible for crop losses of 20 to 100% in the event of a significant epidemic. Our findings made it possible to confirm and/or identify sources of partial resistance and total resistance in several rice lines, primarily in Glaberrima type or Sativa or Indica type. However, nearly all producers preferred varieties were highly susceptible to RYMV. Let us not forget to give credit to senior researchers who have done an excellent job in varietal selection. So far, INERA has released more than 60 rice varieties in Burkina Faso. These varieties, commonly known as FaraKobaRiz or FKR, are classified into a series of FKRs followed by even numbers for the lowland or irrigated system, and a series of FKRs followed by odd numbers for the rain-fed system. There have, therefore, been senior researchers who fortunately achieved a lot of results. The Rice Program of INERA continues to generate many technologies that seem to satisfy producers and consumers. Out of the sixty varieties available, only ten are commonly cultivated across the country. These are mainly the FKR18 or SC27, FKR19, FKR56N, FKR60N, FKR62N, FKR64 or TS2, FKR84 or Orylux6, FKR45N, FKR47N, NERICA4 varieties, etc. Most of these varieties are more than ten years and no longer necessarily take into account the emerging constraints in this context of climate change. In addition, although most of these varieties stand out with potential yields of 5 to 7 tons per hectare, the average yields recorded by our producers are still ranging among the lowest in Africa: between 2 and 3 tons per hectare. Also, several studies have shown that our producers are unable to meet market demand in terms of paddy quantity and quality.

It is within this backdrop that we went out to devise high-yielding and resilient varieties capable of meeting producers and consumers demands. As part of my Ph.D. fieldwork in 2010, I opted for participatory varietal development for direct response to the specific needs of producers in terms of rice varieties.

How did you go about achieving these new rice varieties?

Dr. Traoré: Through a Participatory Rural Appraisal (PRA) study. The findings of this study enabled us to: (i) identify the main rice varieties cultivated in two main rice-growing areas of the country (Banzon and Mogtedo); (ii) classify these varieties according to producers and consumers preference; and finally (iii) identify the main preference criteria for rice varieties. This approach guided us in choosing the parental lines used to cross with RYMV resistant/tolerant lines identified thanks to the varietal screening tests. Then we succeeded in obtaining 16 couples of parental lines. The F2 generations obtained from these crosses underwent the Single Seed Descent (SSD) selection technique that we modified for creating three generations per year. The varietal selection process that started from the F5 generations enabled us to produce several promising recombinant lines. In 2015, we again received support from AGRA through the PASS-027-2015 for financing a project entitled “Development of farmers’ preferred rice varieties resistant RYMV and participatory varietal selection (PVS) in Burkina Faso.” As part of this project, some twenty recombinant lines were evaluated for DUS and ATEV. In 2019, four (4) varieties named KamBoisinRiz or KBR were submitted to the National Seed Committee for registration in the national catalog for agricultural species and varieties in Burkina Faso.

Can you tell us about the characteristics of these new varieties? And how are they different from the other rice varieties?

Dr. Traoré: The four varieties submitted for registration are KBR2 or Massamalo, KBR4 or NongSaamè, KBR6 or Bitonkini and KBR8 or Mouifiida respectively. These new varieties stand out from the other varieties through several traits:

Several palatability tests were conducted in order to compare the KBRs with one of the preferred varieties by the majority of consumers in Burkina Faso, which happen to be FKR64 or TS2 or even Riz de Bagré. KBRs were always better appreciated or, in the worst case, considered equivalent to the TS2-control variety.

How long did your research work last, and what were the difficulties and constraints throughout the process?

Dr. Traoré: It lasted five years. Then it took three years to conduct the DUS/VATE tests (DHS = Distinction-Uniformity-Stability / ATEV = Agronomic, Technological and Environmental Value) and completing the submission files for registration into the national catalog in 2018. The first challenge was related to the lack of skilled technicians to support research activities. One must, therefore, negotiate fixed-term contracts to obtain the support of technicians. Such technicians, having benefited from training and gathered practical experience, would not hesitate to resign and turn to more stable jobs. Also, emphasis should be placed on difficulties related to the financing of field activities, especially for the ATEV and PVS assessments. It took the financial support of AGRA to lead to the submission of these 4 KBRs varieties. Several other promising varieties are still on the shelves, pending the necessary funding to bring them in the hands of producers.

How did producers react to these new varieties?

Dr. Traoré: The reaction of rice farmers in Banzon and especially those of Di, Niassan, Débé or Sourou was of the most encouraging. Low yields (2 to 3 t/ha) in Sourou had prompted several producers to turn to onion production. However, the promising yields with the KBRs series that can reach and even exceed 9 t/ha from the first participatory varietal assessments have helped to bring several producers back to rice farming.

What is being planned to facilitate large-scale access of producers to these new rice varieties?

Dr. Traoré: As a reminder, the KBR rice variety series were developed using a participatory approach. More than 120 producers were involved in the ATEV tests coupled with participatory varietal selection (PVS). In addition, several varietal demonstration tests were conducted as part of another project organized in CONSORTIUM RIZ_BREP, funded by AGRA in 2018 (Competitive & Inclusive Rice Value Chain Development: Rice Marketing and Production Systems Enhancement Project). During the 2018 and 2019 off-seasons and wet cropping seasons, these varietal demonstration tests made it possible to compare the four varieties with high commercial value of the BREP project, i.e. FKR60N, FKR62N, FKR64 and FKR84 with several varieties of the KBRs series (KBR2, KBR4, KBR6, KBR8, KBR10, KBR12, KBR14, KBR16 and KBR18). As a reminder, only the KBR2/4/6/8 varieties were submitted for registration.

Although the KBRs variety series are not yet formally registered in the national catalog, several producers in different rice-growing areas have already adopted these varieties that they produce for their consumption.

Do you have a call or advice to speak out to producers and actors in the rice sector?

Dr. Traoré: I would like to draw the attention of producers and also that of other actors in the rice value chain to the quality issue in the national rice.

The quality of marketed rice is strictly linked to the quality of the raw material, i.e. paddy. The quality of paddy, in turn, can be affected by problems of mixing varieties rather than the intrinsic quality of cultivated varieties. It should be remembered that the quality of the paddy is linked to the quality of the seed being used. Seed accounts for more than 40 percent in the production. The systematic re-use of crops in the form of seed can affect both the quality of the paddy but also the yield potential of the variety. It is, therefore, preferable that producers strive to obtain certified seed from seed professionals. As a researcher, I have worked a lot with producers over several years. I believe that our rice sector can experience a real boom while matching market supply and demand. For this, all actors in the rice value chain would have to be involved and work in synergy to meet the challenge. I also believe that Burkina Faso can significantly reduce its rice import bill. This is possible, and that is why research continues to innovate.

What They said About the Varieties

SAWADOGO Albert (Seed producer in the Kou Valley): I know the KBR varieties. For us producers in Bama plain, it was a great discovery. We have experienced them for more than two cropping seasons. We are eager to be able to produce them in replacement of old varieties.

OUEDRAOGO Zakaria (Producer): We grow many rice varieties, including Chinese varieties. For some time now, there is a new variety called KBR that we are adopting. It is being tested, and we are happy with its yield per hectare. It produces more. We also love eating it for its taste.

KOBYAGDA Soumaila (Extension Agent): KBRs are among the varieties loved by producers. We have experienced KBR12 for two cropping seasons. During the last cropping season, we tested the KBR8, which clearly shows appreciable advantages compared to the old varieties. These KBR varieties can go up to 10 tons per hectare, or even more if the technological package is respected.