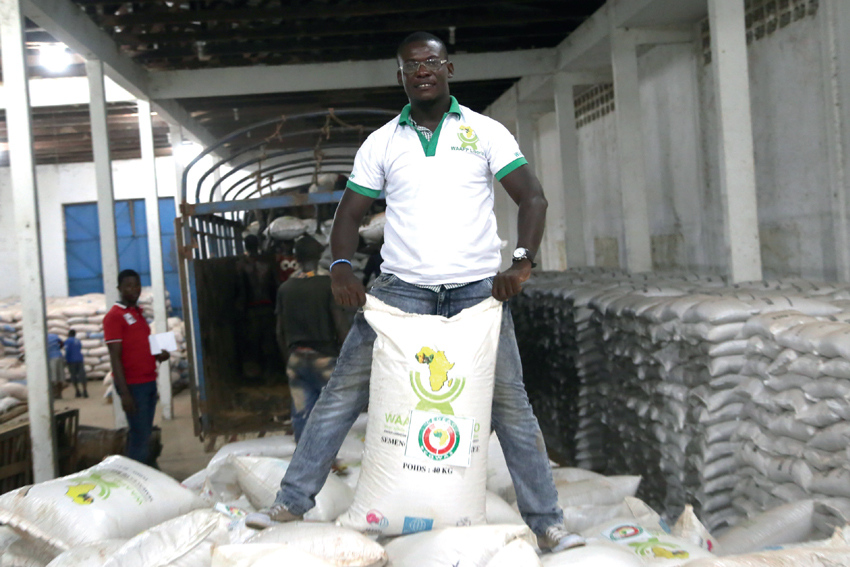 Similar to COVID-19, the affected communities had to deal not only with a health-related challenge but also to address a potential hunger crisis.

But thanks to prompt actions taking and delivered on behalf of the Economic Community of West African States (ECOWAS) and the West African Economic and the Monetary Union (WAEMU), timely assistance was delivered to the affected communities by CORAF and its partners in government and the private sector.

Cowpea from Niger was delivered to the affected communities in Liberia. From Burkina Faso, Cote d’Ivoire, Guinea, Mali, and Nigeria, rice seeds flowed into Guinea, Liberia, and Sierra Leone. The timely reaction from Ghana and Senegal ensured the supply of maize seeds to farmers and producers in Liberia and Sierra Leone. Truckloads of seeds took on journeys of thousands of kilometers to deliver to stricken communities.

Overall, about 4500 tons of seeds were mobilized to help affected communities to produce rice for food in 2015. Additional 8.500 certified seeds from foundations brought relief to farmers and households in the 2016 cropping season.

Relying on its track record and vast experience in driving interventions of regional dimension, CORAF successfully provided the needed coordination and facilitation. Working with the private sector, donors, and decision-makers of several countries, CORAF contributed considerably to preventing the anticipated food crisis.

In the history of West Africa, there had rarely been such a demonstration of solidarity. For ECOWAS and WAEMU, this was a perfect testimony of its vision to promote regional integration and cross-sectoral collaboration to tackle challenges of a regional scale.

The effects of COVID-19 on the food system and economies of West African countries far outweigh those of the Ebola epidemic in size and scope.

More than 15 million people will be affected by the difficult food situation in West Africa, the Sahel, and Cameroon, according to the Food Crisis Prevention Network (RPCA), an initiative of the  Sahel and West Africa Club.

This figure could, in a context without COVID-19, exceed 17 million people during the period between June-August 2020, according to the RPCA data.

“The crisis caused by the coronavirus pandemic is plunging the world economy to depths unknown since the Second World War. COVID-19 pandemic has hit almost all African countries and appears poised to worsen dramatically,” according to a recent African Union report on the effects of COVID-19 on African economies.

The World Food Program is warming of famines at a biblical scale if urgent measures are not taken.

During that meeting, the ECOWAS Commissioner of Agriculture, Environment, and Water Resources highlighted the 2016 template for delivering key agricultural inputs to those in need.

The CORAF’s delivery approach to Ebola-affected communities has been heralded as a playbook for handling seed delivery in a crisis.

Read more about the Road to Recovery

Technical and Financial Partners Already at it