Home Agri-Inputs “Innovate in the Delivery of Inputs to Farmers,” ECOWAS Official 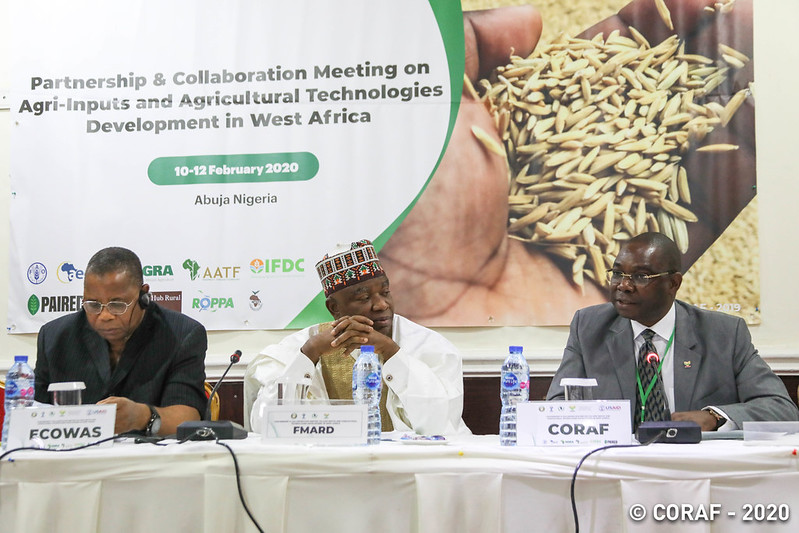 The Commissioner of Agriculture of the Economic Community of West African States (ECOWAS) has called on input actors in West Africa to be innovative in the delivery of agri-inputs to smallholder farmers.

Commissioner Sekou Sangare was speaking at the closing ceremony of an annual forum of West African agri-input actors in the Nigerian capital of Abuja, on Wednesday, February 12, 2020.

The ECOWAS is now demanding partners dialogue, understand one another, align and complement interventions, leverage the scarce resources to deliver inputs to smallholder farmers better.

After an initial partner’s forum held in Dakar, Senegal, in early 2019, close to 55 organizations, including private sector enterprises, policymakers, research institutions, and development partners met in Abuja, Nigeria, from February 10-12, 2020. Their primary goal was to understand better where, when, and what different actor is doing – with the overarching goal to improve coordination input delivery to farmers.

“Our ambition is to produce enough food to be able to feed our people by 2025. That deadline is just in a few years,” stated Sekou Sangare, the Commissioner of Agriculture at the ECOWAS Commission.

The ECOWAS Commissioner sounded the urgency to act quickly in an innovative manner to produce sufficient food to feed the region.

“We are starting a difficult year, particularly in the Sahel. 12 million people are suffering from insufficient food because of insecurity and climate change.”

To the senior ECOWAS official, this means doing business as usual, is not a viable option. He highlighted farmers’ willingness to innovate as long as the options suggested to them are practical and affordable.

“Farmers are ready to contribute to purchasing quality inputs. If farmers get a bag of inputs at the start of the planting season, they will be willing to repay after harvest. We should design inclusive seed delivery systems,” the Commissioner said.

Commissioner Sangare singled out a few input actors for their level or organization and contribution to the provision to inputs delivery in West Africa. The West Africa Fertilizer Association (WAFA) brings together the major players involved in the sector.

“One of our key objectives is to have professional organizations like WAFA to deal with specific issues for each agri-input sector,” said the Commissioner.

West Africa is right now striving to strengthen private sector agri-inputs dealers, producers, processors so that they can better deliver inputs to farmers. WAFA has made substantial progress in this regard – setting up a system where members pay their membership fees and a result placing the organization on a sustainable trajectory.

“I encourage actors to professionalize the input industry so that our farmers can have access to the critical inputs needed.”

“If public systems don’t work, the private sector steps in,” the ECOWAS official said as a way of encouraging the private players to own the delivery of inputs to those in need.

West Africa experiences a remarkably low use of agriculture inputs compared to the rest of the world. This slows economic growth, stalls the ability of the agriculture sector to feed its growing population, and makes it harder to win the fight against poverty.

For decades, a myriad of actors has been involved in the delivery of quality inputs to farmers. But insufficient coordination and duplication of efforts have stalled progress, experts argue.

With funding from the United States Agency for International Development, CORAF is leading an inclusive process of getting actors to working better together. This process has involved reforming seed, fertilizer, and pesticide policies and regulation as well as initiating the design of a new regional strategy tackling agri-inputs in an integrated manner. The strategy is expected to be validated in early April 2020.