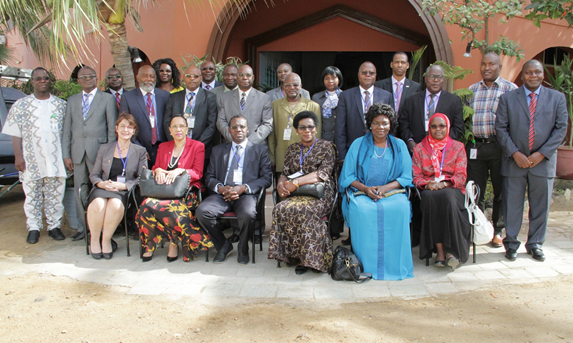 The 22nd ordinary session of the governing board meeting of CORAF/WECARD was held from 17 to 19 January, 2017 at FANA Hotel, Dakar, Senegal.

The board meeting which was attended by 13 out of 16 members was declared open by the governing board chairman, Dr. Alioune FALL, who welcomed the board members and wished all a joyful and prosperous new year. He informed members that CORAF/WECARD is a sub-regional non-profit scientific organisation covering Francophone and Anglophone countries with enormous responsibilities to make positive impact on transformation of agriculture for socio-economic benefits.

Therefore, the board members will use present opportunity to look at key issues that will facilitate realisation of the set objectives with respect to the adoption of Second Strategic Plan (2017-2026) and Third Operational Plan (2017-2022), fund mobilisation, linkages with continental and international organisations. Other topical issues he pointed out were focus on job and wealth creation for youths, migration, and climate change. He reemphasised on the need to establish and strengthen technical partnership with continental and global organisations like African Union, Forum for Agricultural Research in Africa (FARA), Economic Community of West African States (ECOWAS), African Development Bank, the World Bank, USAID and other similar institutions that support agricultural innovation transformation in the sub-region.

Dr. Fall added that priority will be given to fund mobilisation for CORAF/WECARD as most research projects are folding up such as Multi Donors Trust Fund (MTDF) and West Africa Agricultural Productivity Programme (WAAPP).

Also, the Chairman, Dr. Fall, in a lighter mood informed members of CORAF/WECARD thirty years of establishment this year which is worth celebrating to highlight achievements and set a new agenda for the organisation. In view of the foregoing, efforts will be directed towards advocacy and sensitization of policy makers in government and private sectors in the sub region for collaboration and maximum support towards realisations of set goals in the new dispensation.

In conclusion, he appreciated the tremendous efforts and initiatives of the new Executive Director, Dr. Abdou Tenkouano to reposition CORAF/WECARD as global institute to be reckoned in its mandate in agriculture. Also, he applauded the staff for their support which created conducive atmosphere for Dr. Tenkouano to operate since assuming office last year. Present at the meeting were board members, development partners (USAID, World Bank), observers (ANAFE, CIRAD, FARA, STC), management committee as well as secretariat staff of CORAF/WECARD.