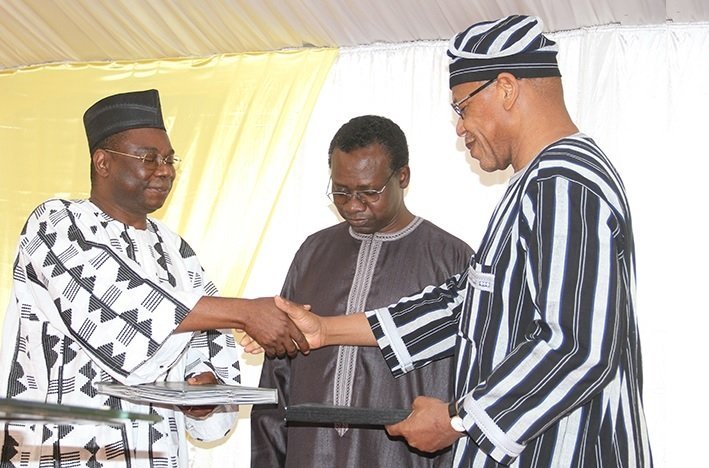 Dr Abdou TENKOUANO, the new Executive Director of CORAF / WECARD officially took office at the leadership of the Executive Secretariat of the West and Central African Council for agricultural research and development (CORAF/WECARD) in presence of Technical and Development Partners of the institution.

From Burkina Faso, Dr Abdou TENKOUANO was recruited in December 17, 2015 during the 20th ordinary session of the Governing Board of the institution upon a recruitment process based on an international call for applications in accordance with the statutes of the Institution.

“CORAF/WECARD will continue to be the champion of scientific innovation tailored to the needs of small family farms in accessing market opportunities whose purpose is to ensure a better quality of life for beneficiaries,” said Dr Abdou TENKOUANO. His term will thus be placed under the sign of regional cooperation, increased resource pooling, and public-private partnerships strengthening.

“Dr TENKOUANO arrives at the head of an institution with strong foundations. CORAF was able to confirm its vital role in the transformation of agriculture in its areas of operation. It has successfully implemented all its programs through the collaboration of all its partners, ” stressed Dr Paco SEREME, outgoing Executive Director.

On behalf of the Technical and Development Partners, Shirley KORE reaffirmed the support of these organizations to CORAF/WECARD. “The impact of CORAF/WECARD in the sub-region is undeniable and it is our duty to support the institution in its mission in favor of agricultural research and the reduction of poverty,” she said.

Dr Abdou TENKOUANO holds a PhD in genetics from the University of Texas A & M, (US), and has proven experience in managing multidisciplinary teams in various regions in Africa for international research centers.

Before taking office at CORAF/WECARD, Dr. TENKOUANO was the Regional Director for Africa of the World Vegetable Center (AVRDC).