Home Gabon A mission of CORAF/WECARD in Libreville: boost cooperation with the NARS of Gabon and ECCAS 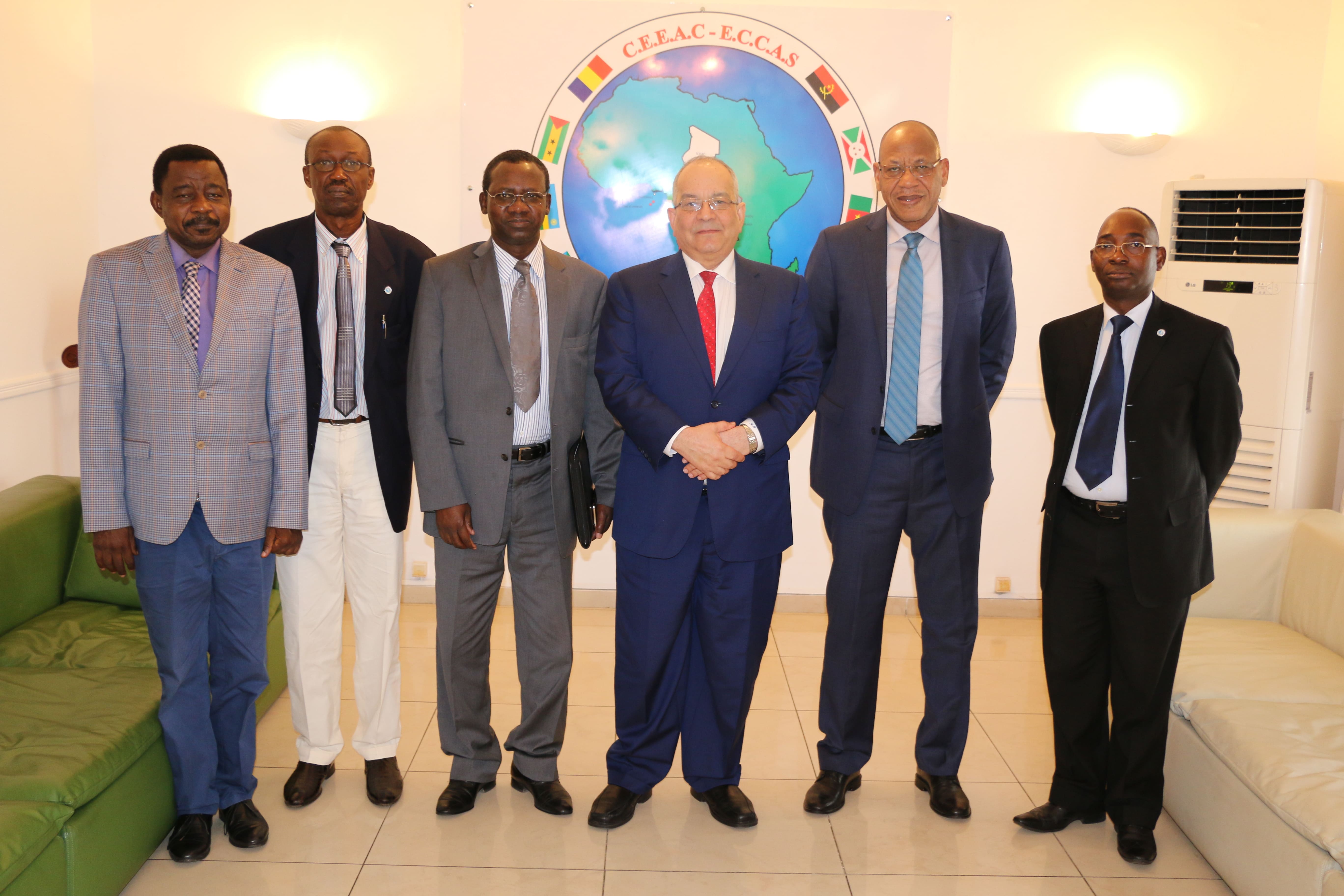 A delegation of CORAF/WECARD, composed of the Chairman of the Governing Board, Dr. Alioune Fall and the Acting Executive Director, Dr Paco SEREME visited Libreville, Gabon from 4 to 5 February 2016  to discuss with the authorities of the National Center of Science and Technology Research (CENAREST) ​​and the Economic Community of Central African States (ECCAS) among other things, boosting cooperation with the two institutions and accelerating,  the preparation of the Central Africa Agricultural Productivity Program (CAAPP) , and adoption of a  roadmap.

The CORAF/WECARD delegation had fruitful discussions with Prof. Daniel Franck IDIATA, Commissioner General of CENAREST,, Prof. Augustus NDOUTOUME the Director of the Institute of Agricultural and Forestry Research (IRAF) of Gabon, , on the l strengths and difficulties of funding agricultural and scientific research in Gabon. The visiting delegation informed their hosts that the challenges are common to virtually all national agricultural research systems in the sub-region. , They in turn shared the experience of WAAPP member countries in mobilizing  resources for  financing  agricultural research and advisory services through setting up national funds.. To better capitalize on this advantage and funding research experience, both sides have, at the request of the Commissioner General of CENAREST, agreed in , on a return  mission of the Director of IRAF to the Headquarters of CORAF/WECARD in Dakar. In addition to the technical aspects, the exchanges between CORAF/WECARD and CENAREST helped to restore confidence between the two institutions.

At the Headquarters of ECCAS, the CORAF/WECARD delegation was received in audience by His Excellency Ambassador Ahmad ALLAM-MI, Secretary General of ECCAS in the presence of Dr. Leon Konande MUDUBU, Technical Coordinator of the Department of Physical Integration, Economic and Monetary (DIPEM) and his collaborators. The delegation CORAF/WECARD recalled the satisfactory participation of ECCAS in the strategic operation of CORAF/WECARD since the signing of the partnership agreement between the two institutions in July 2008 before observing that the level of commitment of ECCAS in the operational functioning of CORAF/WECARD is far from adequate. It was further noted that ECCAS has delayed the commencement of implementation of CAAPP whilst the WAAPP is currently in its second phase of implementation.

With funding from the World Bank and other partners, the aim of WAAPP is to enhance agriculture research activities in order to increase production levels and ultimately improve food and nutrition security. The teams underscored that point that Central Africa will benefit from lessons learned in West Africa in meeting certain challenges in improving the quality of outcomes.

His Excellency ALLAAM-MI welcomed the existence of the agreement between CORAF/WECARD and ECCAS and resulting actions because, he stressed, “falling oil costs that are observed today certainly encourages the member countries of ECCAS, mostly oil producers to diversify their economies by turning to the use of agricultural products.”

The Secretary General of ECCAS also spoke of the Common Agricultural Policy (PAC-ECCAS) as the main vehicle for the revitalization of agriculture in Central Africa since its main objective is to contribute substantially and sustainably to meet the needs of food and nutrition, increased exports and incomes, reducing rural poverty in the member states. He also promised to take appropriate steps to accelerate the effectiveness of CAAPP. As immediate actions , he  instructed the DIPEM Coordinator, to work in collaboration with the Department of Agriculture, to facilitate (i) the holding of the meeting of Ministers of Authorizing IDA funds for the region of Central Africa, (ii) the conduct of a joint mission (Minister Gabonese Officer of IDA funds and the General Secretariat of ECCAS) to Washington to meet the World Bank during the Spring meeting (April 2016), and (iii) the holding of the 21st Session of the Governing Board of CORAF/WECARD at ECCAS Headquarters in Libreville in May 2016.

The Mission to Gabon by a CORAF/WECARD delegation was useful because it helped strengthen and improve communication with the CENAREST and ECCAS for the visibility of CORAF/WECARD in Central Africa.